World's Spiciest Chip Is Sold Only One to a Customer 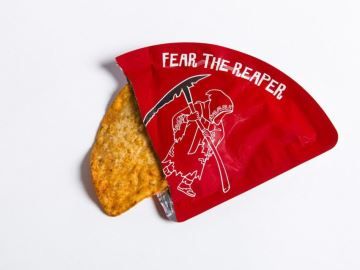 If you’ve ever wondered what it would be like to get pepper-sprayed directly in your mouth, Paqui Chips has something you can’t afford to miss. Following the success of their Carolina Reaper Madness One Chip Challenges back in 2016 and 2017, Food & Wine reports that the company has re-released the sadistic snack. Continuing their part-marketing gimmick, part-public safety effort, the Reaper chip won’t be sold in bags. You just get one chip.

That’s because Paqui dusts its chips with the Carolina Reaper Pepper, considered the world’s hottest, and most (attempted) consumers of the chip report being unable to finish even one. To drive home the point of how hot this chip is—it’s really, extremely, punishingly hot—the chip is sold in a tiny coffin-shaped box.

Peppers like the Carolina Reaper are loaded with capsaicin, a compound that triggers messages of heat and pain and fiery consumption; your body can respond by vomiting or having shortness of breath. While eating the chip is not the same as consuming the bare, whole pepper, it’s still going to be a very uncomfortable experience.

The chip will be sold only on Paqui’s website for $6.99 per chip or $59.90 for a 10-pack. The company also encourages pepper aficionados to upload photos or video of their attempts to finish the chip. If it becomes too much, try eating yogurt, honey, or milk to dampen the effects.