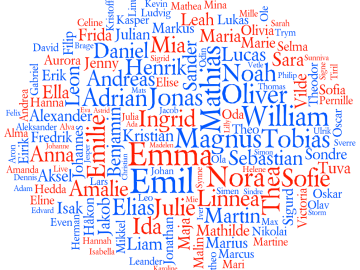 If you're one of those people who regularly says, "I'm good with faces, but not names" to explain why you're asking someone their name for the fifth time, it's not just you — names really are hard to remember.

One study from 2017 found that people have a hard time remembering names, because they're relatively arbitrary. You could, for example, meet someone named Jane, but because that name probably doesn't really describe anything about the person, it might harder for you to remember it.

"One popular idea or hypothesis out there is that the problem is not about our ability to remember things, it’s the high interference between similar things," says Weiwei Zhang, PhD, an assistant professor at the University of California, Riverside who specialises in memory.

In other words, names are harder to remember than faces because there's more overlap with proper names: You've probably met a lot of people with the same name, but it's rare that you'd meet people who have the same or similar faces.

And because those names aren't usually unique to you when you're first meeting someone, it's easier for it to slip from your mind. Plus, you can literally see a person's face, but not their names (unless you think someone definitely "looks like" their name, but that's a different story).

Or maybe you just met someone at a party, and you don't think you'll see them again, so you simply don't even bother trying to remember their name.

Get much as much information associated with the name as possible.

Either way, if you do want to remember someone's name, there are definite ways you can do that. You probably already know the House Bunny trick, where you repeat the person's name after you hear it ( Exorcist voice optional). Hopefully you won't have to repeat it more than once, but if you do, you can interject it casually into conversation, like "so what do you do, Mark?"

What also helps? Trying to link their name to something.

"A lot of the time when we remember names, we form episodic memories where we link together all the episodes and information associated with that specific name," Dr. Zhang says.

So in trying to make sure you don't forget your new co-worker's name on the first day, you might try to associate it with other details about them, like the way they walk and talk, or that they have the same name as someone you know.

"Memory expert research suggests that if you can form some episodic memory — basically, you get much as much information associated with the name as possible — that helps," Dr. Zhang says. "Try to associate all the relevant information you can with that name."

And if all else fails and you still forget someone's name, don't be afraid to ask. After all, it's better to do it sooner rather than later, so that you're not still awkwardly addressing someone as "hey, you!" after three months of knowing them.