What UK's new massive theme park is set to look like 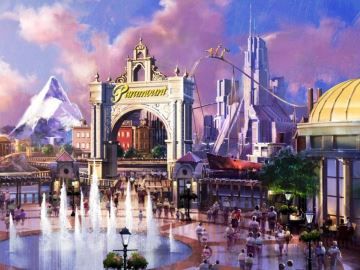 Calling all theme parks fans, you're going to want to take note of a huge new theme park planned for the UK.

The London Resort in Kent will be the size of 136 Wembley Stadiums , and it's set to offer heaps of immersive and themed rides and attractions.

In fact, it's even been hailed as the UK's answer to Disneyland (although it has no affiliation to Disney).

Now, the theme park has signed a huge deal with Paramount Pictures which means it can have access to some of the studios' films for its attractions.

Although it hasn't yet revealed which films will feature, the studios are well known for classics such as The Godfather and the Italian Job, as well as franchises including Mission: Impossible.

But that's not all.

With BBC Studios and ITV Studios also partners with the London Resort , we can't wait to see what else they have planned for UK theme park goers.

However, you're going to need to wait a while longer to explore it for yourself, as the London Resort isn't due to open until 2024, subject to planning.

Still, when it does open it will be the biggest theme park in the UK and the largest entertainment destination in Europe.

The park will open in Swanscombe Kent, 17 minutes by train from London's Kings Cross, and will offer everything from thousands of hotel rooms to rides and immersive experiences.

In fact, it has 200 acres of land dedicated purely to the rides.

No wonder it's one of the largest construction projects in Europe.

The resort's newly-appointed CEO, PY Gerbeau, knows a thing or two about theme parks, with previous ties to Euro Disney and the Millennium Dome.

He said in a statement: "The new partnership with Paramount is fantastic news for everyone.  Now the best of Hollywood will be joining the best of British from BBC Studios and ITV Studios, to create amazing and unique experiences for the whole family.

"I am delighted to join The London Resort and to play my part in helping to create a world-class destination to rival all others.

"Central to that strategy is to partner with the best brands from across TV, film, music and entertainment. Having Paramount on board is a major step towards realising that ambition."