Volkswagen goes back to the future 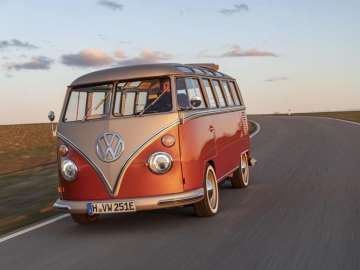 Volkswagen has melded its past and its future with a new all-electric version of its classic T1 microbus.

The e-Bulli is based on a 1966 T1 21-window Samba but has done away with the original’s 1.5-litre flat-four along with quite a lot of its mechanicals to turn it into Kombi for the 21st century.

Using the latest electric drivetrain technology from its passenger cars Volkswagen Commercial Vehicles has turned the e-Bulli into the most powerful T1 it has ever built. The 43bhp air-cooled engine has been replaced with the 82bhp electric motor from the e-Up that also more than doubles the original’s torque to 156lb/ft.

The old four-speed transmission has made way for a single-speed gearbox but, as with the original, the motor is rear-mounted and provides its power to the rear wheels.

The layout is familiar but there are subtle changes (Photo: VWCV)

There’s no word on a 0-60mph time but the e-Bulli ups the top speed from 65mph to an electronically limited 81mph. A 45kWh battery provides the power for up to 124 miles and fast charges to 80 per cent in 40 minutes.

VWCV and its partner eClassics have also given the van’s chassis a thorough update, with multi-link front and rear axles with adjustable shock absorbers and coilover struts, plus a new rack-and-pinion steering system and four internally ventilated disc brakes.

The exterior of the van looks largely unchanged but LED headlights with daytime running elements, plus rear-mounted LED charge indicators are small hints that this isn’t a standard van.

Inside, the familiar eight-seat microbus layout has been retained but finished in high-end leather and with a maritime-inspired solid wood floor. Between the driver and passenger is a modern automatic gear selector but apart from that the cabin area retains the simplicity of the original. The single speedometer even uses the original dial fonts but hides a small digital display for EV-related information, and a retro-look stereo features DAB, Bluetooth and USB. Integrated into the roof is a tablet that connects to VW’s “We Connect” web services.

A modern gear selector and roof-mounted tablet are the most obvious changes inside.

Plenty of other companies already convert classic cars to electric drivetrains, including everything from Beetles and T1s to Ferraris, but this is the first time VW has electrified its iconic van.

And it’s not just a one-off show car. eClassics will offer full vehicles as well as a conversion service for owners’ T1, based on the e-Bulli van. But they’re not a budget way into EV ownership, conversions start at around £60,000.

The exterior is virtually unchanged despite the major mechanical changes.