Vegan restaurant first of its kind to win a Michelin star 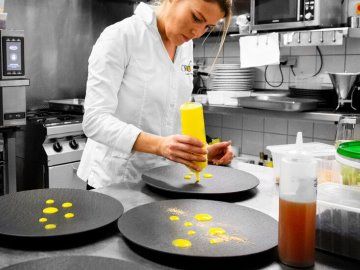 A vegan restaurant in France is believed to be the first of its kind in Europe to win a coveted Michelin star.

ONA, which stands for Origine Non Animale, opened in Ares, near Bordeaux, in 2016. It was launched by the self-taught chef Claire Vallee after a crowdfunding campaign and a loan from a green bank.

Ms Vallee told the French news agency AFP about the moment she received a call from the Michelin Guide.

ONA is “the first vegan restaurant in France to win a star”, a Michelin Guide spokeswoman added.

Before closing due to coronavirus restrictions, the chef offered seven courses on her €59 (£52) tasting menu, including dishes that combine pine, boletus mushrooms and sake, and celery with tonka beans and amber ale.

Ms Vallee conceded her restaurant did not come easy, and said traditional French banks told her “the outlook for veganism and plant-based food was too uncertain.”

The chosen location for ONA, in the Arcachon basin on the Atlantic coast and an area better known for fine seafood, was also not considered promising enough.

But Ms Vallee said she doesn’t hold a grudge: “Everybody does their job”.

She instead secured backing through crowdfunding and from Le Nef, a bank that specialises in lending to projects it deems ethical and sustainable.

Though while Ms Vallee saw strong support, she still wondered whether a plant-based restaurant would see success, “because vegetable-based cooking is difficult and innovative”.

She added: “This goes to show that nothing is impossible. The most important thing is to enjoy doing this.”

The French chef Alexis Gauthier, who held a Michelin star for more than 12 years and now offers an acclaimed vegan tasting menu at his eponymous restaurant in Soho, London, said Ms Vallee’s success will open doors for others in the industry.

He told i: “I think it’s wonderful. Michelin is slow to embrace new trends so it’s great they’ve done it.

“Developing vegan dishes in fine dining restaurants is hard – some chefs are scared. It’s a challenge, but it can be done.

“I think the possibilities to be creative are endless. This is a positive way to start the year and chefs will be inspired.”

Ms Vallee, now considered to be a pioneer of vegan cuisine in France and beyond, said she has followed in the footsteps of other chefs, singling out the late Jean-Christian Jury, who ran the now closed Mano Verde restaurant in Berlin.

Michelin has recently celebrated a number of other meat-free restaurants around the world, including Nix in New York, the US’ only starred vegetarian establishment, the two-starred Daigo in Tokyo, Japan, and Fe He Hui in Shanghai, China.