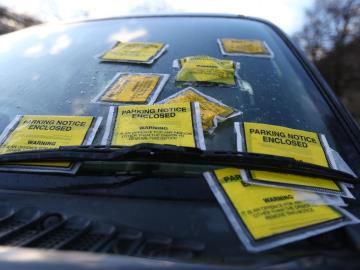 Unpaid parking fines and council tax arrears made up almost all of the 2.6 million debts referred to bailiffs by councils in England and Wales in 2018-19.

Bailiffs, also known as enforcement agents, can visit a property to remove and sell goods to repay certain debts, including council tax arrears, parking notices and other debts owed to councils.

Analysis by the charity Money Advice Trust (MAT) which runs National Debtline and Business Debtline, looked at the details of bailiff referrals after receiving freedom of information (FOI) responses from 367 local authorities.

It found the use of bailiffs has increased by 7% since 2016-17, with unpaid parking fines mainly responsible for the increase. They accounted for 1.1 million referrals, with council tax arrears at 1.4 million.

MAT said that 83% of National Debtline callers surveyed, who have experienced bailiff action, reported the situation had a negative impact on their wellbeing.

However it also said that more councils are adopting best practice on affordability and vulnerability.

It found 64 councils have now signed up to the Citizens Advice/LGA (Local Government Association) council tax protocol - up from 50 two years ago. A further 23 councils said they are considering doing this.

Joanna Elson, chief executive of the MAT, said: "Bailiff action should only ever be used as a last resort, and can be avoided by early intervention, making sure residents get the free debt advice they need, and agreeing repayment

arrangements that are affordable and sustainable.

"We will continue to work constructively with councils to help them reduce their bailiff use - and to impress on central Government the urgent need for the national policy changes that are required to quicken the pace of change."

Chair of the LGA's resources board Richard Watts said: "Councils have a duty to their residents to collect taxes, which play a vital role in funding important services that people rely on.

"However, we realise that times are tough and councils do their best to protect those affected the most, whether through introducing hardships funds or taking a sympathetic and constructive approach to the way we collect unpaid tax.

"We have worked with Citizens Advice on a protocol for recovering debts, which as this report demonstrates is having a positive effect.

"It includes the need for fair collection and enforcement policies and the ability for councils to take back cases involving vulnerable families.

"Anyone having trouble paying their council bills should get in touch with their local authority for financial help and advice."