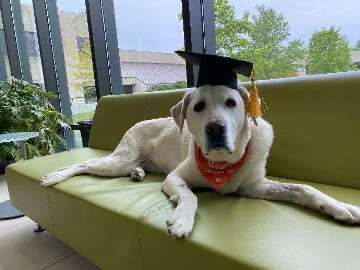 Moose, having served since 2014 as a therapy dog at Virginia Tech’s Cook Counseling Center, has spent enough years there to earn a doggie doctorate of his own. And he’s had plenty of experience. Not only has he been a therapy dog for patients going through cancer treatment, but Moose also has been on the receiving end of such treatment himself.

The pooch was diagnosed with prostate cancer a mere week after his 64th (in human years) birthday in February, and has been undergoing radiation, chemotherapy and other treatments since, Virginia Tech said in a statement Friday.

His doctors are at the Virginia-Maryland College of Veterinary Medicine, a joint venture between Virginia Tech and the University of Maryland at College Park. Moose is one of four dogs at the counseling center who serve as working therapy animals and ambassadors for mental health awareness, Virginia Tech said.

The dog has been a comforting presence in more than 7,500 counseling sessions and 500 outreach events in his six years at Virginia Tech, the school said. In 2019 he received the Virginia Veterinary Medical Association’s Animal Hero Award.

He works with licensed counselor Trent Davis, who has been at the center for 10 years, according to CNN. He launched the animal-assisted therapy problem for students who need alternatives to humans.

“Some humans haven’t had the best experience with other humans, or even other dogs. In both those cases, Moose provides a very safe and comforting force in the room," Davis told CNN. “These students see Moose as someone who’s going to accept them. They don’t worry about him judging them.”

After a “pawsitive prognosis,” Moose has returned to work, rejoining his animal and human colleagues.

“When not working, he enjoys swimming, playing tug of war, and perhaps most of all, eating,” the school said.
Moose received his degree during a virtual ceremony, showered with “plenty of treats and a hearty ‘Good boy!’ ” the school said.