The Reason Why Your Car's Tires Are Black 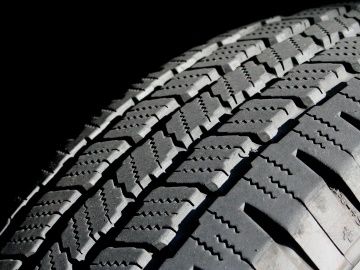 With the possible exception of some Big Wheels or other child transportation vehicles, most tires are black. You’d be hard-pressed to find a tire shop and come across a Goodyear or Michelin sample that’s any other color.

Natural rubber, however, is closer to an off-white shade, and early-model cars sported that lighter color. Early tire makers also often added zinc oxide to their natural rubber as a way to strengthen the material, resulting in white tires. But at some point, tire manufacturers decided to go darker. Why?

Jalopnik automotive journalist David Tracy pondered the question when he visited Detroit’s Ford Piquette Avenue Plant Museum and came across the white tires of a Ford Model T, a vehicle that began production in 1908. Tracy posed the question of the color transition to Michelin, which informed him that tires changed color when manufacturers began adding carbon black around 1917.

It wasn’t for cosmetic purposes. Carbon black—an elemental carbon made from the incomplete combustion of gas or oil and collected as particles—increases a tire’s durability, in part by blocking damaging UV rays that can cause rubber to crack, and by improving road grip. It also improves tensile strength, making tires more resistant to road wear.

There was another wrinkle: World War I led to a shortage of zinc oxide, as it was needed to make ammunition. That’s when carbon black became tire companies' go-to strengthening material (though zinc oxide does still play a role in the tire-making process today). Carbon black was initially supplied to tire manufacturer B.F. Goodrich by Binney & Smith, the company that produced Crayola crayons, which originally sourced the material for a line of ink pens.

Was that the end of the tire color evolution? Almost. Early on, companies decided to try and limit production costs by only adding carbon black to the treads, inadvertently creating the whitewall tire with a white sidewall and dark treads. The two-tone look is still popular among classic car collectors today.