The Matrix: Keanu Reeves to reprise role for fourth chapter 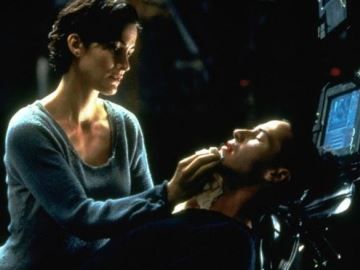 Keanu Reeves and Carrie-Anne Moss will return in a fourth instalment of sci-fi franchise The Matrix, with Reeves reprising his lead role as hacker Neo.

Matrix co-creator Lana Wachowski will write, direct and produce the film, a third sequel to the original 1999 hit.

Ms Wachowski celebrated The Matrix's return, saying many of the ideas it explores are "even more relevant now".

The first three films in the franchise earned more than $1.6bn (£1.3bn) at the global box office.

Warner Bros Pictures Group chairman Toby Emmerich announced the new film on Tuesday, saying the studio "could not be more excited" about its return.

"Lana is a true visionary - a singular and original creative filmmaker - and we are thrilled that she is writing, directing and producing this new chapter", he said.

The original film was released 20 years ago and told the story of Neo and his discovery that humanity was trapped in a simulated reality. It proved a major hit and spawned two sequels - The Matrix Reloaded and The Matrix Revolutions.

The third instalment was the first film ever to be released simultaneously around the world at the same hour.

Rumours of a fourth chapter have been circulating since 2017, with reports at the time stating that Warner Bros was "in the early stages of developing a relaunch".

In a statement on Tuesday, Ms Wachowski said she was "very happy to have these characters back in my life and grateful for another chance to work with my brilliant friends."