The first thing we unpack when we move house is... 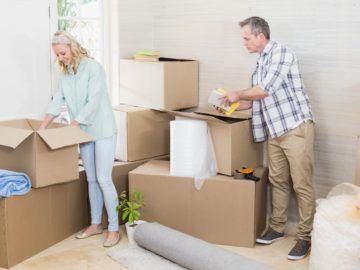 The kettle is the first thing people unpack when they move into their new home, closely followed by setting up the TV and the WiFi router.

The kettle is the first thing we unpack when we move house because it turns out all we want after a stressful moving process is a cup of tea or coffee.

In a survey of 2,000 homeowners by UK housebuilder Redrow, more than half (58%) revealed that unpacking the kettle is the very first thing they do. It's hardly surprising – moving day is chaotic enough so once the final boxes are in, popping the kettle on for a cuppa is the perfect way to unwind (even if only for a mere five minutes) before all the unpacking begins.

Setting up the TV and getting online were also main priorities for moving day. Almost two-thirds (65% connected their TV in the first 24 hours, while 57% set up their WiFi router during this timeframe too.

Dr James Jackson, lecturer in Psychology at Leeds Trinity University, says when moving into a new house it's key to create an area of calm.

"Moving house is a stressful time and it's normal to feel anxious during those first few days," says Dr James. "Research shows one of the best ways to reduce anxiety is to create a relaxing view.

"A simple way to do this is to treat yourself to a new plant or fresh bunch of flowers when you first move in and display these in a central position in your home. While everything around you may still be in boxes and chaotic, flowers and plants will have a soothing effect and can be a welcome distraction."

Take a look below at how moving house habits differ by location: