Teen who lost her wallet got it back 60 years later 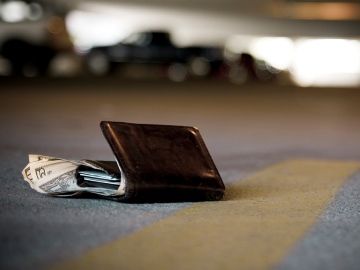 When Joyce Stratman lost her wallet about 60 years ago, she never expected to see it again. She had been a freshman at Cambria-Friesland Middle School and High School in Wisconsin when her friend stole her little red billfold and hid it on top of a locker room divider wall. It was meant to be a prank, but the wallet ended up falling through a hole in the cinder blocks where it was impossible to retrieve. "We both joked that one day the school would be torn down and someone would find it,” she told the Daily Citizen for a recent story.

The scenario Joyce joked about as a teenager is exactly what happened decades later. In June, a construction crew remodeling the school's locker room discovered an old wallet, and thanks to some detective work, it's finally found its way back to its owner.

The wallet Joyce Stratman lost didn't have a driver's license or any other form of identification, but it was filled with clues. There were old photographs, a school lunch ticket, and magazine clippings tucked inside the folds. The biggest lead came from a yellowed sheet of lined paper with notes from a Bible class: The name Joyce D. was written at the top.

Steve De Young, the foreman of the construction crew, shared the discovery with his father-in-law Glenn Smits, who had graduated from Cambria Union High School in 1963. When he saw the name he thought of his cousin Joyce Stratman, whose original name was Joyce Dyksta.

When De Young's wife texted his cousin, who now lives in Michigan, she confirmed his suspicions. Stratman didn't find any cash or valuables in the wallet when it was returned to her, but she did find several precious artifacts she thought had been lost forever. There were photos of her friends and siblings taken more than 60 years ago. She even found a lock of her sister's hair. After being reminded of the old memories, she called up the friend who had been responsible for losing the wallet in the first place and thanked her for making the experience possible.

Sixty years is a long time to pass before finding a lost wallet, but it's not a record. Just a few weeks ago, a wallet that had been lost for 75 years was recovered from a church vent in Missouri.
Original Source: https://www.msn.com/en-gb/news/offbeat/wisconsin-teen-who-lost-her-wallet-got-it-back%e2%80%9460-years-later/ar-AAF1rNW