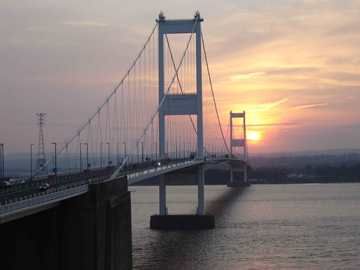 A motorway service station overlooking the Severn Bridge has been named the worst in England after visitors criticised its unwelcoming 1960s exterior and “grim and dismal” toilets.

Severn View services on the M48 in Gloucestershire – near the village of Aust to the north of Bristol – attracted a customer satisfaction rating of just 72% in a survey of facilities offered by the 111 service stations across the English motorway network.

Norton Canes (Roadchef) services between junctions 6 and 7 of the M6 toll road in Staffordshire was rated the best for the second year running in the survey by the independent watchdog Transport Focus.

The results are published on Thursday in the watchdog’s third annual Motorway Services User Survey, in which 11,600 drivers were questioned on issues such as the state of the buildings and toilets, food and drink, and staff friendliness.

Overall, motorway service operators performed well: 90% of visitors said they were satisfied with the experience and facilities on offer. However, HGV drivers and others who drive for a living were the least satisfied group at 83%, down from 88% last year.

Many users complained of being ripped off by overpriced food and drink. Only 59% rated the food they bought to eat on the premises as value for money – down from 66% last year, prompting calls for more variety and healthier choices.

Anthony Smith, chief executive of Transport Focus, said: “Motorway users tell us they have a good experience when visiting service areas, but it’s clear that many do not feel the experience is good value for money. They want pleasant, well-maintained facilities with good-quality food choices.

“Motorway services continue to play an important safety role providing drivers with the opportunity to take a break. Drivers confirm they feel less stressed and are more alert after stopping at motorway services.”

Severn View services, owned by operator Moto, is one of the smallest motorway services in the network. It has attracted a swathe of critical Google reviews; one user claimed it was “tired and overdue a refit” and another that the restaurant had “flies buzzing about”. Other reviewers described the toilet facilities as “grim”, “falling apart” and “dismal”.

Moto said: “We are disappointed that Severn View came out bottom of the list this year despite scoring 90% for the friendliness of its staff. The small location means we are limited in the range of brands and services we can offer.

“However, we will be redoubling our efforts in the year ahead to improve the services on offer at Severn View and expect to see a similar significant improvement to the one we achieved at Thurrock last year.”

Thurrock, which was recently refurbished, is the site with the biggest increase in satisfaction – up to 93% this year from 68% in 2018, when it came bottom in the survey.

Luke Bosdet, an AA spokesman, said: “Motorway service areas have long faced an image battle with the motorists that use them. On one hand, they are a godsend for toilet breaks, relief from monotonous hours on the motorway and the chance for a nap or wake-up coffee. On the other, the sheer numbers that use them during the summer and the strain that can put on the service area facilities can leave drivers with a poor impression.”

The best and worst