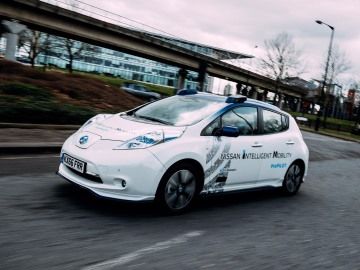 A self-driving car has completed the longest and most complex journey made by an autonomous vehicle in the UK.

The partly state-funded project, which was 30 months in the making, comes as Britain seeks to entice developers of autonomous vehicles.

The government in 2017 estimated the UK market for connected and self-driving vehicles could be worth some £28bn by 2035, amid a £907bn global market.

“Other drivers around the vehicle would not have noticed that the vehicle is actually fully autonomous,” said Nissan’s head of European research and development David Moss.

“The vehicle is much more aware of what is happening in that surrounding area than possibly a driver would be because of the amount of sensors which are continually monitoring the environment.”

As well as receiving government funds, the £13.5m project known as HumanDrive worked with the relevant authorities to receive approval. The project was led by Nissan as part of a consortium.

Several safety measures were put into place including regular breaks, risk assessments and having someone in both the driver’s and front passenger’s seat in case of emergency.

Nissan has previously said the UK's flexible approach to testing autonomous vehicles helped it pick London for its first European tests in 2017.

Junior business minister Nadhim Zahawi hailed the news as "an incredible achievement for Nissan and the HumanDrive consortium, and a huge step towards the rollout of driverless cars on UK streets".

But the advancement of self-driving cars around the world has been hampered by safety concerns and problems regarding insurance liability.

The government says its priority is to facilitate the safe rollout of more advanced self-driving cars when the sector is able to do so.

"You're not going to see all of this tomorrow in a vehicle," Mr Moss said. "But what you will see is elements of it progressively come in ... over the years."