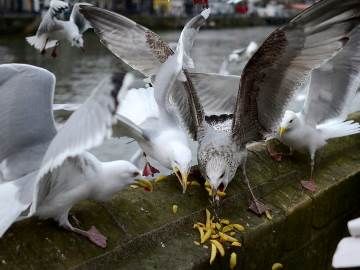 Seagulls, known to plague anyone who dares attempt to dine around them, prefer to eat food that has been touched by human hands, new research suggests.

According to a study by the University of Exeter, herring gulls are more likely to peck at food they have seen a human holding than food that has been left alone.

When presented with two identical food items, one of which they had observed being held by a person, the gulls pecked more often at the handled food.

The study was conducted in Cornish towns including Falmouth and Penzance and tested a total of 38 gulls by approaching individual gulls and placing two wrapped flapjacks under buckets in front of them.

A researcher would remove the buckets and pick up one of the flapjacks, handle it for 20 seconds, and then return it to its spot.

Of the 38 birds tested, 24 pecked at one of the flapjacks and 19 of these (79 per cent) chose the one handled by the researcher.

Researchers said this behaviour suggests the gulls use human action to decide what to eat.

Senior author Laura Kelley said: “Our findings suggest that gulls are more likely to approach food that they have seen people drop or put down, so they may associate areas where people are eating with an easy meal.

“This highlights the importance of disposing of food waste properly, as inadvertently feeding gulls reinforces these associations.”

Lead author Madeleine Goumas, of the Centre of Ecology and Conservation at Exeter University’s Penryn Campus in Cornwall, said this could “partly explain why gulls have been successful in colonising urban areas”.

As part of the study, which was published in the Royal Society Open Science journal, researchers also repeated the experiment with two non-food items – sponges cut into the same shape and size as the flapjacks.

This time, the birds clearly preferred the handled sponge, with results exceeding “chance levels” which suggested handling was what piqued their attention to food in particular.

Last year, the University of Exeter conducted another study on seagulls and found staring at the birds made them less likely to steal food from people.

Ms Goumas said: “Herring gulls have a generalist diet that typically includes fish and invertebrates, but they will also consume food found in landfill sites and household waste.

“The effect of this shift in food quality and quantity away from more ‘natural’ sources is not yet clear.

“Herring gulls are quite adaptable and are likely to be moving into urban areas because of the resources available.

“For example, there are lots of suitable nesting sites, and a ready supply of food.”