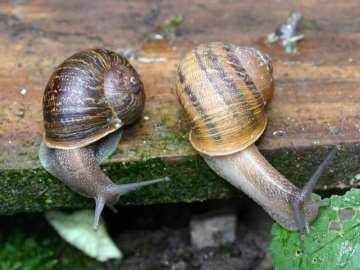 A reversible superglue that mimics the under-appreciated properties of dried snail mucus has proved strong enough to bear the weight of an average man.

Scientists who tested the slime-inspired product found that two sticky squares the size of postage stamps were sufficient to hold an 87kg (192lb) weight in the form of a volunteer engineering student.

Scientists at the University of Pennsylvania were pondering the problem when they realised that molluscs may have the answer. “Snails are the perfect example,” said Shu Yang, a professor of materials science who led the work. “When they move around, the mucus they produce is a viscous liquid, but when it dries they become firmly stuck.”

Yang and her colleagues created the new glue from hydrogel, a form of polymer network that contains a lot of liquid water. In its wet state, the hydrogel seeps and spreads into the tiniest cracks and contours on a surface. But when it dries, it locks into position.

Experiments with the new glue showed that it was incredibly strong in its dry state, but quickly softened and gently released its grip when water was added to rehydrate the hydrogel. Laboratory tests showed the glue could be applied and then detached from butterfly wings without harming the delicate tissues.

Rather than a liquid that is squeezed from a tube, the adhesive is coated on to small, thin wafers patterned with tiny channels to allow water in and out. The glue dries naturally in air, or faster when it is heated, and is detached with a well-placed squirt of water. The use of water to undo the adhesive means it can only be used in dry environments, though Yang said her team was now hunting for similar materials that softened with heat or electricity instead.

The hydrogel glue mimics a trick that snails use to protect themselves from dehydration in dry weather. Instead of gliding around on a layer of wet mucus, the molluscs create a hard, dry layer that locks on to the grooves and pits of the surface they are on. Known as an epiphragm, the membrane seals the base of the snail and prevents it from losing too much water.

As with an epiphragm, the glue works best on rough surfaces, but Yang said the adhesive was still effective on glass. “The surface doesn’t have to be very, very rough, because any kind of surface has some roughness,” she said. Details of the work are published in Proceedings of the National Academy of Sciences.

A reversible superglue would be welcomed by medics, if case studies of accidents with the bonding agent are anything to go by. Medical journals describe numerous incidents of people glueing up their ears, and sticking their eyelids together, after mistaking the adhesive for ear or eye drops. In one case, a carpet upholsterer stuck his hands together with superglue. He was only freed when doctors referred him to a cosmetic surgeon who dissolved the glue with acetone.