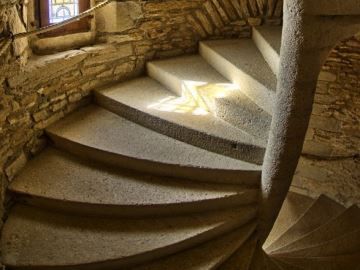 If you’re a fan of Game of Thrones or medieval programs in general, you’re probably familiar with action-packed battle scenes during which soldiers storm castles, dodge arrows, and dash up spiral staircases. And, while those spiral staircases might not necessarily ascend clockwise in every television show or movie you’ve watched, they usually did in real life.

According to Nerdist, medieval architects built staircases to wrap around in a clockwise direction in order to disadvantage any enemies who might climb them. Since most soldiers wielded swords in their right hands, this meant that their swings would be inhibited by the inner wall, and they’d have to round each curve before striking—fully exposing themselves in the process.

Just as the clockwise spiral hindered attackers, so, too, did it favor the castle’s defenders. As they descended, they could swing their swords in arcs that matched the curve of the outer wall, and use the inner wall as a partial shield. And, because the outer wall runs along the wider edge of the stairs, there was also more room for defenders to swing. So, if you’re planning on storming a medieval castle any time soon, you should try to recruit as many left-handed soldiers as possible. And if you’re defending one, it’s best to station your lefties on crossbow duty and leave the tower-defending to the righties.

On his blog All Things Medieval, Will Kalif explains that the individual stairs themselves provided another useful advantage to protectors of the realm. Because the individual steps weren’t all designed with the same specifications, it made for much more uneven staircases than what we see today. This wouldn’t impede the defenders, having grown accustomed to the inconsistencies of the staircases in their home castle, but it could definitely trip up the attackers. Plus, going down a set of stairs is always less labor-intensive than going up.

Staircase construction and battle tactics are far from the only things that have changed since the Middle Ages. Back then, people even walked differently than we do—find out how (and why) here.