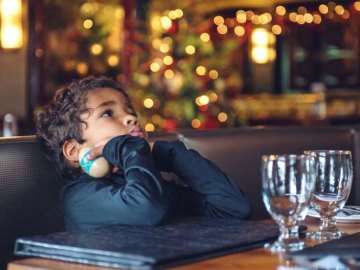 A pub's new rules stating that children must remain at their tables rather than 'wandering about' has been branded "ridiculous" and "unfair".

The controversial new rules at The Hen and Chicken Pub in Bristol appeared on a laminated poster on the pub's notice board behind the bar.

They apply to all children and teenagers under the age of 18.

The new restrictions state that children must be sat at a table with an adult at all times, whether dining or not, and prohibits "free roaming, running, scootering, or climbing."

It furthers asks parents to be "mindful to prevent children shouting or screaming".

The Bedminister pub has mixed responses, with some parents championing the pub for being upfront, while others brand it "ridiculous".

Pub director James Townend has said he implemented this policy has been in place for more than five years, but that it is going to be more strictly enforced in future.

The poster in full reads: "Please be aware that as part of out licensing commitment to the safeguarding of children and minors:

"Children under the age of 10 are not permitted on the presmises after 6pm.

"Children between the ages of 10 & 16 years are only permitted on the premises after 7pm when having a meal, accompanied by an adult and must depart by 9pm.

"16-18 year olds are not permitted on the premises after 10pm unless attending a performance upstairs and accompanied by an adult.

"In consideration of all our customers, we do insist that:

"All children must be sat at a table with an adult at all times, whether dining or not & inside or outside.

"Please be mindful to prevent children shouting or screaming.

"Thank you for your understanding and consideration to our staff and all our customers."

Mr Townend who has been the pub director for a decade said: "This is not simply a knee-jerk reaction.

"As a dad to three sons, I completely understand it can be hard work keeping your children sat down at the pub.

"Sadly there are a minority of parents who think it's okay to relinquish control of their parental responsibilities as soon as they enter the pub, and think it's okay for their children to run around screaming and shouting.

"There are places where children are free to do this such as parks and playgrounds.

"But when you enter a pub, which has always been seen as an adult domain, there is a responsibility to conform a little bit.

"We have customers who want to enjoy a nice pint or meal after work without people running around shouting."

He also said the new rules can prevent dangers.

Mr Townend said: "Let's not forget it can also be hazardous.

"I once picked up a baby who was stood very close to the kitchen's swinging door. If I hadn't have done that, the door could easily swung open and knocked her over.

"We don't take steps like this lightly but the issue has been getting worse recently so we felt like something needed to be done.

"There's a reasonable level of behaviour we expect from all of our customers regardless of their age."

He added that staff have been told to let parents know about the newly enforced rules when they enter, so they can make an informed decision as to whether they would like to stay or go elsewhere.

He stressed children are still very much welcome in the pub, providing they abide by the rules, adding that the Hen and Chicken is still an important part of the local community.

The 31-year-old said: "I think this is absolutely fair enough. They're basically saying that it's really a pub for adults and that's fine, I just wouldn't take my child there.

"I actually prefer it when establishments are clear and this sign is very clear.

"There's nothing worse than walking into a pub with kids and feeling unwelcome, despite the fact there are kids' menus on the tables.

"I would much rather places are upfront like this."

But there are also parents who believe the pub is acting unreasonably.

Mum-of-two Emma Grimshaw said: "I think the thing about the hours is fair enough but the rest is just totally unrealistic.

"There's no way you can get a child to sit down for the whole time, putting that pressure on parents is unfair.

"How many adults sit down the whole time they're there? And also, did the owners sit still when they were kids? I bet they didn't.

"Either ban kids entirely or let kids be kids, they can't make up ridiculous rules like this.

"Also let's not forget kids aren't the only ones who are noisy in pubs - students, stag dos and birthday parties all give them a good run for their money.

"Local pubs cafes and restaurants are meant to be for the whole community, but these new rules goes against that."

On Facebook, Natasha Shaddick also shared her disapproval writing: "Glad I'm not the only one pretty shocked by this!! Let's pray they don't all go this way or we will be moving."