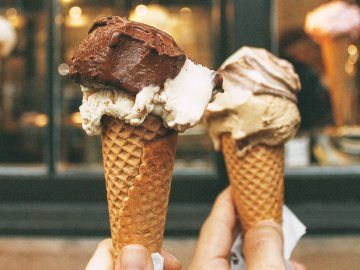 Police in Rome have been accused of tipping off the owners of restaurants and ice cream parlours to impending visits by health inspectors in return for bribes – of gelato and plates of pasta.

The gastronomic graft allegedly took place in some of Rome’s best-known tourist spots, from the Trevi Fountain to the Spanish Steps.

Three officers from the city’s local police force are being investigated for turning a blind eye to irregularities and passing on information about hygiene controls that could have resulted in large fines.

In return, they were rewarded with scoops of gelato, plates of spaghetti alla carbonara and free meals.

The three are all “vigili”, members of a city police force who wear white shirts and white domed helmets, similar to the blue helmets worn by British bobbies.

They established cosy relationships with gelaterias, bars and restaurants around the Trevi Fountain, in Campo de’ Fiori, a historic piazza, and at the foot of the Spanish Steps in Piazza di Spagna.

“Be careful, they’re going to pay you a visit,” they told restaurant owners, according to Il Messagero newspaper.

One officer received a free dinner at a well-known trattoria, with “the promise of two more.”

Another was able to enjoy ice cream from a gelateria near the Trevi Fountain whenever he liked.

“We are confident we can explain the whole business in court,” Michele Gentiloni Silveri, a lawyer acting for the officers.

The collusion emerged from a much broader investigationinto the alleged infiltration of the ‘Ndrangheta, the Calabrian mafia, in the historic heart of Rome.