Pavement parking may be kicked to the kerb 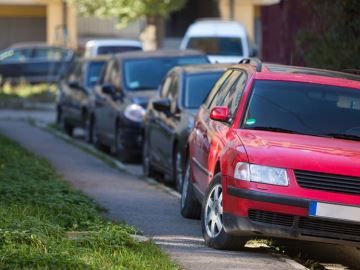 Parking on the pavement could be banned across England, based on the upcoming findings of a new inquiry launched by the government.

The Transport Committee will explore the issue of pavement parking, which can cause safety issues for pedestrians when vehicles block walkways.

As well as forcing pedestrians out into the road, pavement parking can also cause substantial damage to kerbs and pathways, with councils forced to foot the repair bills.

But with some roads too narrow to safely allow for strictly on-street parking, a move to introduce fines for parking on the pavement will prove contentious.

RAC’s head of roads policy, Nicholas Lyes, reiterated the RAC’s support for a move to tackle inconsiderate pavement parking, but warned that the case for an outright ban is not so clear cut.

He said: “There is no doubt that selfish parking that blocks pavements can be a major hindrance and danger to pedestrians and vulnerable road users.

“[However] there are instances, particularly on Britain’s many narrow residential streets, where drivers believe they are doing the right thing by putting a wheel or two on the kerb.”

Mr Lyes said motorists do this to ensure access for other vehicles, including emergency services, while also making sure they leave enough space for pedestrians, including wheelchair users and those with buggies.

He added: “This inquiry should look carefully at how we can strike the right balance.”

A blanket ban across England would see the rest of the country fall in line with London, which first introduced a ban on pavement parking back in 1974.

The Highway Code states: “You must not park partially or wholly on the pavement in London, and should not do so elsewhere unless signs permit it” – and anyone caught breaking the law faces a fine.

In 2018, a Transport Bill in introduced in the Scottish parliament proposed new measures to allow local authorities to fine motorists who leave their vehicles straddling the kerb.

The proposal was included in a range of new measures to improve the urban environment in Scotland, including those to tackle air pollution and boost public transport provision.