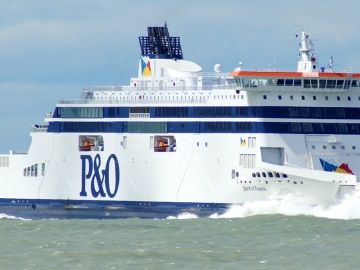 P&O Ferries is seeking almost £33m in damages from the government over its handling of a challenge to ferry contracts under a no-deal Brexit.

The British-based shipping company also wants courts to cancel the Department for Transport's settlement with Eurotunnel, and impose civil penalties.

In March, the DfT agreed to pay £33m to Eurotunnel, after the cross-channel operator sued for not being considered for a no-deal Brexit freight contract.

The DfT said it acted appropriately.

"This cross-government decision helped protect vital freight capacity for medical supplies to enter the country, in the event the UK left the EU without a deal," a spokesperson said.

As part of the agreement with Eurotunnel, the French company was mandated to spend £33m of taxpayers' money on improvements to the infrastructure of its terminal in Folkestone.

P&O's lawyers claim that this stipulation amounts to a public contract, and that the £33m settlement "was not, and could not be, a genuine estimate of Eurotunnel's alleged losses".

It says that such an agreement, which includes building work, "could only lawfully have been entered into following a duly advertised and competitive tender process".

P&O has also sought a judicial review into the actions of the DfT, which is run by Chris Grayling, and claims that the settlement amounts to a subsidy for Eurotunnel.

This, P&O argues, would be unlawful state aid.

In court filings, P&O cites a note from a joint government statement on the day that the Eurotunnel settlement was announced, which reads: "We have agreed to support a series of measures that will ease the pressure and minimise disruption, at our EU borders, as well as improve security."

P&O argues that those concerns "manifestly do not justify expenditure solely at Eurotunnel's terminal… but apply to and justify similar expenditure at the terminals and for facilities of Eurotunnel's Short Sea competitors".

Procurement expert and former government lawyer Andrew Dean, of Clifford Chance LLP, told the BBC that P&O was seeking to "rip up the settlement agreement".

The shipping company argues that the DfT had "contracted Eurotunnel to provide the UK government with £33m worth of infrastructure-related works or services, which should have been put out to tender in accordance with public procurement rules".

If P&O's case is successful, the government could also face challenges from construction and facilities management companies, which might have bid for the work at Eurotunnel's terminal if there had been a tender process.

The pool of potential claimants would then be much wider than just ports, rail and ferry companies.

Earlier this month, following the extension of the Brexit deadline to 31 October, the DfT cancelled its contracts with Brittany Ferries and DFDS to provide extra ferry services in the event that Britain left the EU without a deal.

The cancellations came just months after the DfT was forced to scrap a contract with a third provider, the ferryless Seaborne Freight, which could have cost the taxpayer more than £50m.