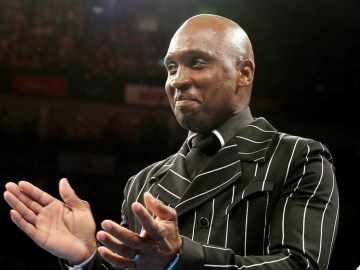 Former world champion Nigel Benn likened himself to Benjamin Button as he confirmed he will come out of retirement at the age of 55.

Briton Benn, who last fought in 1996, said the bout with ex-world champion Sakio Bika in Birmingham on 23 November will give him "closure".

"I feel the time is right now. It's nothing to do with age," Benn said.

But ex-world champion Richie Woodhall told BBC Sport: "I fear for him. I really hope it doesn't come around."

"When I was boxing, you don't really realise but you seem to be tense, stiff, hard, and punches bounce off you. You become immune to punches.

The 51-year-old added: "I keep fit and work out on the bag twice a week, doing 10 rounds a session no problem at all.

"I can work at a high pace but I am so soft, I couldn't take a punch off anyone."

Asked if he could withstand the kind of punches now that he felt when winning the world super-middleweight title in 1998, Woodhall told the 5 Live Boxing Podcast: "Absolutely no way.

"That is what I worry about with Nigel more than anything. He may feel he can take the shots but when you get in the ring with 10oz gloves and you're hit, it's serious stuff."

BBC Radio 5 Live boxing analyst Steve Bunce said a 23-year break after a career before returning to the sport made for "dreadful cocktail".

Benn won the middleweight and super-middleweight world titles during a career in which he won 42, lost five and drew one of his 48 fights.

But at a London news conference, Benn - nicknamed the 'Dark Destroyer' during his career - likened himself to the fictional Hollywood film character who got younger with age.

"It's not the 'Dark Destroyer' because everything synonymous with that name is not who I am," Benn said.

"It's been a long time coming. This fight is all about me. It wasn't financial; it was always about closure that I wanted that I never had.

"I suffered with a lot of issues in my life from a young age, from 1972 when my brother died - the murder of my brother - which I carried through to my adult life.

"At the age of eight, I started smoking cigarettes to 41, I started doing ecstasy, smoking spliffs all throughout my career, but suffered with depression.

"There's not one fight that I went through that I didn't suffer with. It was bugging me. I don't event think I was at my best, I don't know how I got that far."

The fight with 40-year-old Australian Bika will be licensed by the British and Irish Boxing Authority (BIBA), rather than the British Boxing Board of Control (BBBofC).

A BIBA doctor said Benn was fit to fight and that tests show his physiological age is "at least 15 years younger" than his actual age.

Bika held the WBC world super-middleweight title as recently as 2014 and last fought in 2017.