Most shocking things discovered in the Titanic wreckage 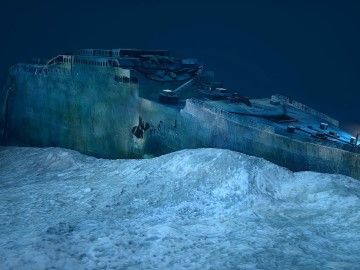 1. A pair of gloves that survived the wreckage

A battered pair of white cotton gloves were one of the artifacts found in the Titanic wreckage, and they have since been dubbed some of the "rarest Titanic artifacts ever recovered," according to USA Today. The gloves have been put on display in various Titanic exhibitions since they were found, but in 2016, they were returned to a conservation facility for permanent retirement.

2. The violin played as the ship sank

While an old violin being found among the wreckage of the Titanic isn't necessarily shocking, its backstory is. According to CNN, the decaying violin was the very one that bandleader Wallace Hartley used to play "Nearer, My God, to Thee" as the ship sank. It sold for $1.7 million during a U.K. auction in 2013. And for more on things of the past that we've lost, here are 45 Historical Sites That No Longer Exist.

3. The bell rung to warn of the iceberg

The bell from the crow's nests of the Titanic was recovered in the 1985 expedition and is currently a collection piece on display at the Titanic Museum in Massachusetts. It's the same bell that was rung three times by lookout Frederick Fleet in an attempt to warn the ship that an iceberg was ahead.

A menu of the last meal served on the Titanic to first-class passengers was auctioned off in 2012, selling for $83,000, according to the BBC. The meal was served the same day the ship crashed into the glacier, and it featured several courses including "eggs Argenteuil, consomme fermier, and chicken a la Maryland." And for some valuable things you might own, check out the 27 Hidden Treasures That Could Be in Your Attic Right Now.

Despite being submerged in the ocean for 73 years, divers recovered a piece of sheet music for the song "Put Your Arms Around Me, Honey" from the 1910 Broadway production of Madame Sherry. It was played by the doomed musicians on the sinking ship, according to the Dothan Eagle.

Since being discovered, the artifact has been on display at several Titanic exhibits, most recently in Atlanta, Georgia. And for more music facts, check out these 40 Facts About Music That Really Sing.

6. A letter written on Titanic stationary the day before the ship sank

Also surviving the wreckage was a letter penned by first-class passenger Oskar Holverson. Written to his mother the day before the ship sank, the letter was found folded up in a notebook in Holverson's pocket.

"It is the only letter written on Titanic stationery to have actually survived going into the North Atlantic," Andrew Aldridge, an auctioneer and valuer at the U.K. auction house Henry Aldridge and Son, told History. In 2014, the auction house sold the Titanic artifact for $166,000.

7. A pocket watch stuck at the time the ship sank

The pocket watch of one of the ship's victims was another artifact found in the Titanic wreckage. As reported by The Telegraph, the rusty watch was owned by passenger John Chapman, who was traveling with his wife, Lizzie. What makes this so unique is the fact that it's literally frozen in time. The watch is stuck at 1:45 a.m., which is around the time the ship became submerged under water.

8. A fur coat worn by a stewardess who survived the shipwreck

A floor-length beaver fur coat found in the Titanic wreckage was worn by first-class stewardess Mabel Bennett, who, according to The Telegraph, was given the coat to wear after she was found waiting for a lifeboat clad in only a nightgown. As one of the only fully intact pieces of clothing to survive the shipwreck, it sold at auction for around $165,000 in 2017.

Bennett, who was 33 when the ship sank, survived that night. She later died at 96 in 1974, making her the longest living female member of the Titanic crew. And for more people who lived to see impressive ages, check out 27 Famous People Who've Lived to 100.

9. A bronze cherub from the grand staircase's upper landing

One bronze cherub statue, a decoration from the upper landing of the Titanic's grand staircase, was also recovered in 1985. However, the statue is missing its left foot, likely due to the fact that it was ripped from its post as the ship sank. And if you think you know a lot about famous statues, find out if you can Guess Your State Based on This One Famous Statue.

These keys recovered from the wreckage aren't just any old keys. They were used by crewman Samuel Hemming during the sinking of the ship to unlock a door, behind which a stock of lifeboat lanterns were waiting.

"The keys themselves played a part in the story as they were actually used in those last desperate hours," Aldridge told The Irish Times. "This is because Mr. Hemming received a personal order from Captain Edward J. Smith as the ship was sinking and it became apparent all was lost to ensure all of the lifeboats were provided with lamps."

11. A vest worn by a third-class passenger

Another piece of clothing recovered from the wreckage was the vest of William Henry Allen, a third-class passenger on the ship. The black wool vest was sold in a collection by Guernsey's Auctioneers in 2012, nearly a century after the tragedy occurred.

12. And a bracelet engraved with the name of a third-class passenger

Out of the wreckage of the Titanic also came a woman's 15-karat rose gold and silver bracelet with the name Amy encrusted in diamonds. In her 1998 book Titanic: Women and Children First, Judith Geller, former director of merchandising for the Titanic exhibition, suggests that it might have belonged to Amy Stanley, a third-class passenger and one of the only Amys on board.

13. Perfume bottles that were meant for a new life in America

When German-born chemist Adolphe Saalfeld boarded the Titanic, he did so with a satchel full of various perfume bottle samples—all of which were found in the ship's wreckage. Saalfeld, a first-class passenger, had intended to open his own fragrance shop in America—a dream he sadly never realized.