'Milkshaking' added to dictionary after attacks 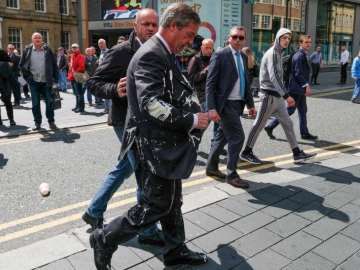 Nigel Farage and Tommy Robinson being doused in milkshake has inspired a new entry in Collins Dictionary.

The word “milkshaking” has been recognised on a 10-strong list of words brought to prominence by Brexit, compiled by lexicographers.

Brexit Party leader Mr Farage had a milkshake thrown at him in May during a campaign walkabout in Newcastle. English Defence League founder Mr Robinson, and Ukip candidate Carl Benjamin have also been involved in "milkshaking" incidents.

It comes as Climate Strike was named Collins's Word Of The Year for 2019.

It was described as "a form of protest that took off just over one year ago with the actions of Swedish schoolgirl Greta Thunberg and which has grown to become a worldwide movement".

Collins said the term was used on average 100 times more in 2019 than the previous year.

The word ‘non-binary’ has also officially been added to the dictionary in recognition of "changes in how people relate to each other and define themselves," Collins said.

Dubbed the Brexicon, the dictionary's list of Brexit-inspired words also includes Brexiteer, described as "a supporter or architect of the withdrawal of Britain from the European Union".

Brexiety, which is "a state of heightened anxiety triggered by concerns about the imminent withdrawal of Britain from the European Union", also features on the list.

The term cakeism - trying to have your cake and eat it - is also recognised, having been used by Remainers and Brexiteers to describe their rivals.

It is defined as "a wish to enjoy two desirable but incompatible alternatives".

Remoaner also features in the Brexicon, described as a "derogatory term" and "a person who continues to argue that Britain should remain in the European Union despite the result of the referendum of 2016".

The list also features now-common words or phrases such as no-deal, Project Fear, stockpiling and prorogue.

It comes after Collins Dictionary named Brexit its word of the year for 2016.

Collins language consultant Helen Newstead said: "The dictionary has no opinion on Brexit, other than to say it has been quite generous in its gifts to the English language, as well as I am sure inspiring the use of many old-fashioned expletives.

"The Brexicon could be even longer, but we feel our selection sums up many of the key themes since Collins named Brexit word of the year in 2016.

"As the process continues through this latest flextension, no doubt more words will emerge until we come to a Brexend."