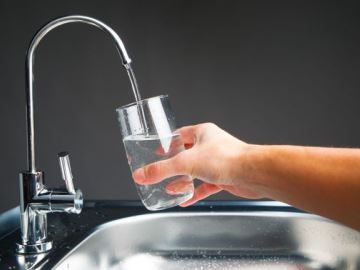 Microplastics are produced by wear and tear from products such as polyurethane varnish, car tyres and wet wipes.

The World Health Organisation has called for urgent research on the risks of microplastic to human health after confirming that tiny fragments are found in drinking water.

In its first assessment of plastic pollution the WHO concluded that there was evidence from 50 studies that microscopic particles are found in water and could be absorbed by the human body.

Professor Peter Jarvis of Cranfield University, one of the report's authors, told Sky News that tap water in the UK contains between zero and 10 microplastic pieces in every litre.

But bottled water can contain "a few hundred".

"There are higher risks of exposure to plastics from bottled water than tap water. The evidence points to the cap itself as the main contributor to plastics in the water."

The WHO report says particles too small to be seen with the naked eye are likely to be absorbed by the human body but "firm conclusions" on the risk "cannot yet be determined".

Dr Maria Neira, a public health and environment specialist at the WHO, said: "We urgently need to know more about the health impact of microplastics because they are everywhere, including our drinking water."

Studies have also found microplastics in seafood, soil, Arctic ice and the air.

They are produced by wear and tear from plastic products such as polyurethane varnish, car tyres and wet wipes. A polyester jumper can shed 700 plastic fibres in every wash.

The WHO called for a crackdown on plastic pollution to reduce human exposure and the risk to the environment.

That was echoed by Imogen Napper, a microplastic scientist and Sky Ocean Rescue Scholar.

"How do you remove something that small from the environment?

"We live in the plastic age and there are benefits, but we need to reign in plastic use.

"We don't need items like bananas wrapped in plastic when they already have a protective layer."