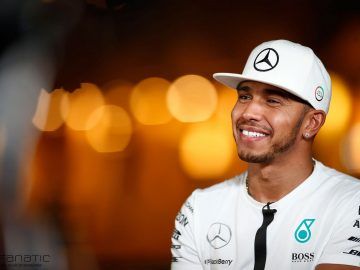 Lewis Hamilton has been crowned Formula One world champion for a fourth time despite a stunning opening-lap collision with rival Sebastian Vettel at the Mexican Grand Prix.

Hamilton finished only ninth following the explosive turn-three incident, after which the British driver asked if Vettel had deliberately crashed into him.

The championship rivals both sustained damage in the collision as Hamilton's Mercedes limped back to the pit lane with a right-rear puncture while Vettel stopped for repairs to his Ferrari's broken front wing.

And although a determined Vettel fought back through the field to cross the line in fourth place, he fell well short of the victory he required to prevent Hamilton from winning the title with two rounds to spare.

Max Verstappen, who also banged wheels with Vettel in a frenetic start to Sunday's race, took advantage of the first-lap mayhem to win from Valtteri Bottas with Ferrari's Kimi Raikkonen completing the podium places.

He had vowed to seal his fourth championship in style. After qualifying only third, Hamilton knew that the 800-metre charge to the first corner - the longest on the calendar - represented his best chance of writing his name into the record books with his 10th victory of the year.

Pole-sitter Vettel, Verstappen and Hamilton charged three abreast at 220mph into the left-handed opening turn. Verstappen then made his move around the outside of Vettel at the right-handed second corner before the pair banged wheels.

Vettel then clumsily tapped the back of Verstappen's Red Bull before Hamilton sensed his opportunity. He roared around the outside of Vettel at the ensuing turn, and the Ferrari driver - now down to third - made contact with Hamilton's right-rear rubber.

The German - whose hero Michael Schumacher famously took Jacques Villeneuve out of the concluding race in Jerez 20 years ago in a do-or-die attempt to win the championship - appeared at fault.

Hamilton led the inquisition as he asked over the team radio whether it was indeed an act of desperation from his title rival.

"Did he hit me deliberately?" Hamilton asked.

"Not sure, Lewis," came the reply from the Briton's race engineer Pete Bonnington.

The stewards looked at the dramatic incident, but took just seven minutes to make up their mind by taking the course of pursuing no further action.

Vettel, who had led this year's championship battle by 25 points in May but had been cast 66 points adrift of Hamilton prior to Sunday's dramatic race in Mexico City, emerged from the pits 35 seconds adrift of leader Verstappen with Hamilton one minute behind the Red Bull man.

Vettel was soon on a charge and almost came unstuck for a third time when he was forced off the road by Felipe Massa, but the four-time champion emerged unscathed, and by half-distance he was into the points, albeit the best part of 60 seconds adrift of second-placed Bottas.

Hamilton's progress through the pack was not as swift, and he was soon a lap down. He fought past Fernando Alonso in the closing stages, but it was inconsequential.

Despite Vettel reducing the points deficit to 56, with just two races remaining Hamilton heads to Brazil for the year's penultimate grand prix with an unassailable lead.

As such, Hamilton follows up his title triumphs in 2008, 2014 and 2015, to join Schumacher, Juan Manuel Fangio, Alain Prost and Vettel as only the fifth driver to have won motor racing's biggest prize on more than three occasions.

Hamilton crossed the line with his head in his hands before holding aloft a Union Flag aloft as he celebrated his remarkable achievement.