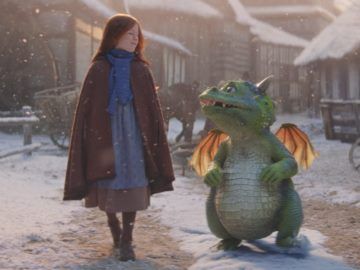 A sweet festive tradition – or perhaps the zenith of a capitalist takeover of culture, depending on how Grinch-like you’re feeling today – the John Lewis Christmas advert song has, over the past decade, become one of the biggest talking points of the festive season.

The formula is simple: take a classic song (always by a man), slow it down, add some gentle piano and swelling strings, and make it approximately five times more mawkish. The resulting cover, usually sung by an up-and-coming (often female) singer, soundtracks a whimsical Christmas tale extolling the joys of commercialism. Some, predictably, are terrible. Others are perfectly pleasant, and a precious few are actually pretty good.

Here is every John Lewis advert song since the ancient tradition began (2008), ranked from worst to best.

This was the biggest commercial flop of the lot, and it’s not particularly hard to see why – Blythe Pepino’s operatic voice is impressive, but this cover drags itself along at an irredeemably slow pace.

Frankly, you could be listening to Tom Odell’s drippy cover of “Real Love” as you read this, and you’ll probably have already forgotten what it sounds like.

After she gained a cult following with acoustic covers on YouTube, it was Gabrielle Aplin’s cover of Frankie Goes To Hollywood’s 1984 classic that propelled her into the mainstream, becoming the first UK No 1 single to come from the John Lewis Christmas ads. It’s a little anodyne though, awash with breathiness and vocal fry. Aplin has produced much better songs since.

The inaugural John Lewis Christmas cover song, this one feels like a festive performance by a group of primary school kids – joined by their trendy, Beatles-loving teacher. It builds to a slapdash cacophony of voices and instruments – janky violins and all – but there’s something sweet about it.

Transforming Slash’s inimitable opening guitar riff into a muted keyboard refrain strips it off its soul somewhat – but Taken By Trees’s Victoria Bergsman injects just enough pathos into her cover that all is almost forgiven.

A very pleasant, if a little insipid, cover of the 1985 REO Speedwagon ballad “Can’t Fight This Feeling”, led by a gentle piano and with a tasteful smattering of festive bells. Smith has stayed true to his usual vocal style – clear-cut and emotive with a mildly exaggerated English accent (“wot started out as friendship…”) – but he’s adiosed that big stadium-pop sound in favour of the obligatory twinkling and jingling and soporific strings. It’s all very nice.

For hardcore Morrissey fans (a dying breed these days, thanks to the regularity of Moz’s offensive rants), it was an affront that he even allowed his song to be used for such corporate means. For everyone else, Slow Moving Millie’s rendition, though inevitably not a patch on the original, was pleasant enough fare.

A song about aching to escape your humdrum hometown doesn’t exactly lend itself to Christmas cheer, but the Norwegian singer’s cover adds a suitably slow tempo theatricality to proceedings, and gives strange new intonations to the song’s wistful lyrics. It’s unchallenging and sentimental, so it fits the remit perfectly – but it failed to boost Aurora’s career in the same way it did for others.

Guy Garvey’s gravelly baritone and Northern twang isn’t quite what we’ve come to expect from a John Lewis advert song, but after 10 years of placid covers, his relatively gutsy rendition of the 1969 Abbey Road song is a welcome change.

No one hates Lily Allen’s cover of “Somewhere Only We Know” as much as Lily Allen does. “I can’t listen to the song, I’ve got to be honest,” she told Radio 1’s Nick Grimshaw just a few weeks after the song’s release in 2013. “It’s quite shrill.” Earlier this year, she claimed she’d been “bullied” by her label into recording the cover. And yet, saccharine though it may be, few of Allen’s own songs showcase her often maligned voice quite like this cover. Add to that the twinkling piano and swelling strings, and the result is a weepy sugar hit to rival your late-night Quality Street binge.

It’s hard to ruin a song whose lyrics are as quietly profound as these, but Goulding’s cover does more than simply not tarnish Elton John and Bernie Taupin’s original. Sure, her distinctly trilling voice raises some people’s hackles, but if you can get on board, this minimalist arrangement works beautifully. Eight years later, John himself starred in the 2018 John Lewis Christmas advert, playing out his career in reverse to the strains of his own, 1971 version of thissong. Of course, it is incomparable to anything else on this list, so it can only share the top spot.