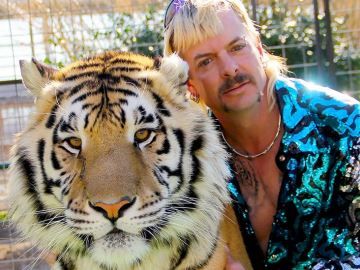 Carole Baskin has reacted to the news that Donald Trump did not pardon Joe Exotic.

Exotic – real name Joseph Allen Maldonado-Passage – is currently serving a 22-year sentence in Fort Worth, Texas, after being convicted in 2019 of trying to hire a hitman to kill his zookeeper rival Baskin, as well as numerous animal abuse charges.

On Trump’s final day in office yesterday (20 January), one of his last acts in power was to pardon or give a commuted sentence to 143 people, including rappers Lil Wayne and Kodak Black.

Exotic – who had publically been petitioning for a presidential pardon and also wrote a letter to Trump requesting one – was not pardoned.

Baskin told BuzzFeed News: “I think only Joe’s team and the media were ever even thinking about a pardon for Joe.

“There is no benefit, other than a feeble attempt to deflect attention, for anyone to pardon someone who walked up to five tigers and shot them in the head in order to clear cage space for the circus, who was going to pay him to board their tigers during the offseason.”

She added that Exotic is receiving the “equal justice” that he deserves.

“Tigers are the world’s favourite animal and Joe Schreibvogel Maldonado-Passage is right where he belongs: in a cage," she said.

Both Exotic and Baskin found fame in Netflix’s docuseries Tiger King, which aired in March last year and swiftly became a global phenomenon.

Fans of the series have also reacted to the news that Exotic was not pardoned, with many joking that the zookeeper’s legal team would have had to call off the limousine that had been allegedly waiting near his prison to escort him home.

Exotic responded to the news in a Twitter post that reads: “I was too innocent and too GAY to deserve a Pardon from Trump. I only mattered to Don Jr when he needed to make a comment about me to boost his social media post.”

The 57-year-old added: “Boy were we all stupid to believe he actually stood for Equal Justice? His corrupt friends all come first.”