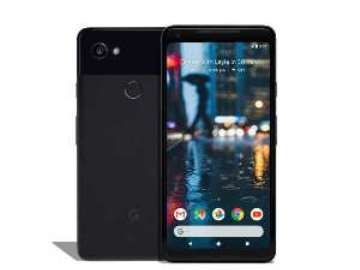 The search giant — which jumped into making a range of consumer electronics under the 'Made by Google' moniker a year ago — is hoping for a better result with these successor devices, especially as it takes on Apple and its $1,000 upcoming iPhone X.

As with the first Pixel phones, Google is leveraging the capabilities of the artificial-intelligence-infused Google Assistant, which the company claims is even brainier than before. Indeed, Google CEO Sundar Pichai pumped up Google’s mission as being a AI-first, rather than mobile first, company.

Pixel 2 starts at $649 for a version with 64GB of storage and climbs to $749 for double the storage. It comes in the kind of colors marketers love to nickname: Just Black, Clearly White and Kinda Blue.

The larger XL version goes for $849 or $949, with the same storage capacities. It comes in either Just Black or  Black & White.

At these prices, the new Pixels are lower priced than the iPhone X, but they're not cheap. They're roughly equivalent to iPhone 8 (which starts $699 for 64GB) and 8 Plus and Samsung S8, which starts at $725.

Both devices will run the freshest version of Android's operating system, Oreo, and will be sold in the U.S. by Verizon and by Best Buy. You can buy it unlocked from Google and use it on any of the carriers. It also works on Google’s own Project Fi network.

As the larger of the two devices, the XL has a 6-inch pOLED display with an 18:9 display format that has been emerging on several devices lately. Pixel 2 has a 5-inch AMOLED display. We'll have to see if there will be any supply constraints, as may be the case with the OLED screens coming on the iPhone X.

Google asked a series of questions in recent teaser ads leading up to today’s launch. One of them concerned battery woes consumers have with existing devices. For its part, Google says the new Pixels will feature “all day” battery life and fast charging—with a claim of 7 hours of juice after just 15 minutes plugged in. We’ll see. Worth nothing however is that there is no wireless charging, which the latest iPhones finally added and which other smartphone makers such have Samsung have offered for awhile.

The new Pixels are also water resistant, a feature that had been a big omission with the first Pixels. The devices have front-facing stereo speakers, but in following Apple’s unfortunate lead, gone is the conventional headphone jack. There will be a USB-C adapter you can use with your existing standard headphones. Or you can use wireless Bluetooth headphones (sold separately).

The cameras in last year’s Pixels were a banner feature and Google contends that through machine learning they’re even better this time around. Phone makers are never going to tell you the new cameras are anything but fantastic so the proof will be in the pudding.

Among the camera features, Google is highlighting portrait shots with background blurs, from both the front and back cameras, similar to what Apple promises on the X. Google says it accomplishes this not with dual rear cameras but dual sensors. (Apple launched its own portrait mode feature, one of my favorites, on the dual rear cameras starting with the iPhone 7 Plus.)

The Pixel camera also can capture a few seconds of video before and after you take a still image, something Apple also does on iPhones through its Live Photos feature.

The latest Pixels can also take advantage of fused optical and electronic video stabilization when you’re shooting video, the goal being to smooth out the shakes.

And Google is once again supplying free cloud storage for all the pictures and videos you take with the devices, a welcome feature introduced last year.

Google recently announced support for what it calls ARCore, the company’s augmented reality platform, and an obvious rival to Apple’s HomeKit. So it’s not surprising the Pixels also have a hook into AR. Coming soon are what Google says are playful emojis and virtual AR characters added to the pictures and videos you shoot. For better or worse, Google doesn't seem to have an answer for the "animojis" Apple is promising on the iPhone X in which your facial features are mimicked.

During the Google I/O developer conference in May, Pichai talked up technology known as Google Lens, in which the camera begins to understand just what it is it is seeing. That means pointing the camera at landmarks, books, music albums, movies and artwork by clicking on a Lens icon in Google Photos and having the phone recognize those items. You can also use it to copy Web addresses and contact info from pictures on a poster or business cards.

It sounds far out but note the Lens feature, still in beta, conjures up memories of the Firefly feature on the ill-fated Amazon Fire Phone, as well as what Samsung is trying to do on its current flagship phones with its Bixby assistant.

You won’t be able to unlock the phone with your face as Apple promises to do with FaceID on the iPhone X. And whether that is good or bad will largely depend on how well Apple pulls off the stunt when the X arrives. The Google phones have a fingerprint sensor, typical for premium smartphones.

Beyond the camera, the ever-smarter voice-capable Google Assistant is still likely to be a chief selling point for many prospective buyers. For one thing, the Assistant can tap into Google’s second-to-none expertise in search. And Google has come up with a sort of novel, and yes, possibly gimmicky, way to summon the Assistant (beyond voice of course). To do so, you merely squeeze the side of the device through a feature Google calls ActiveEdge. Squeeze also works to silence the phone.

This squeezable feature is not a first: it launched on the HTC U11 smartphone. Perhaps that’s no coincidence given the fact that HTC is making the Pixel 2 and that Google recently acquired some HTC employees to help with making hardware. LG is manufacturing the XL model.