Heavy snow to cause disruption ahead of more wind and rain 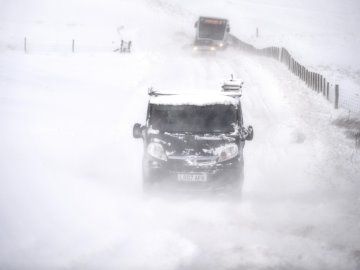 Snow and ice could cause travel disruption on Wednesday before Britain is struck by another burst of heavy rain and gales from Storm Dennis over the weekend.

Cumbria, Northumberland and vast swathes of Scotland have been warned of "blizzard conditions" by the Met Office as snow showers are combined with strong winds.

The regions are subject of a yellow weather warning with up to 10cm of snow forecast in higher parts, while Northern Ireland could see further snow showers, forecasters said.

Around 730 properties are believed to have been affected by flooding in recent days, the Environment Agency said as it warned of more wet weather ahead when Dennis takes hold.

Caroline Douglass, flood duty manager at the agency, said: "River and surface water flooding is possible on Saturday into Sunday due to Storm Dennis and we are advising people to check their flood risk and to stay safe on the coast or when walking or driving near swollen rivers."

Dennis, the fourth named storm of the 2019-20 season, is set to bring a second consecutive weekend of wet and windy weather after Ciara struck the UK with winds of up to 97mph.

Gusts of 50mph are expected, with more than 60mph possible over hills, coastal areas and exposed locations, the Met Office said.

Predicted heavy rain could also run the risk of further flooding, with 43warnings still in place in England, six in Scotland and one in Wales following recent heavy rainfall.