Harlech street takes record as steepest in the world 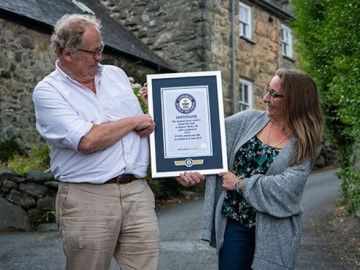 A street in north Wales has been declared the steepest in the world.

Residents in Harlech, Gwynedd, are celebrating after Guinness World Records verified the gradient of Ffordd Pen Llech at 37.45%.

The title had been held by Baldwin Street in Dunedin, New Zealand, with a gradient of 35% at its steepest.

Campaigner Gwyn Headley said: "I feel utter relief - and jubilation. I feel sorry for the New Zealanders - but steeper is steeper."

"I'm still angry, I'm angry over lots of things in the world this week but this has really just ruined my week - thank you," said Hamish McNeilly from the New Zealand news website Stuff.

"I've been covering high jinx and stories to do with Baldwin Street since 2008, there's been lots of interesting things happen on that street, many of which have gained worldwide attention, there's been a dip there, lots of high jinx world records broken and of course the ultimate world record was broken today by a Welsh town.

"I'm not going to get over this, this follows the cricket for me so we're still very angry. It's a bad week, it really is."

He added that a street in San Francisco was now understood to be looking at taking the title away from Wales.

Mr Headley and Sarah Badhan know just what an uphill struggle life can be for those living on Ffordd Pen Llech.

While most live at the bottom of the hill, the chemist and post office are at the top.

Mr Headley's research found the street was the steepest in Great Britain, though a different methodology was used to calculate Baldwin Street in New Zealand.

So they engaged surveyors and measurements taken in January showed Fordd Pen Llech had a one in 2.67 gradient at its steepest part, compared with the current record holder's one in 2.86.

Mr Headley said: "Guinness World Records were ultra-specific in the criteria and although we were confident in meeting or exceeding nine of them, I was worried about the tenth."

Criteria for the record stated the street must be a public thoroughfare, fully surfaced and have buildings alongside the carriageway.

However the Harlech bid was able to justify the absence of blueprints before 1842 because the street was thought to have existed for more than 1,000 years.

He added: "I hope Harlech enjoys the celebrations and that the new title brings lots of people to the beautiful town, to experience the world's steepest street for themselves."

A celebration is being planned for Saturday close to the Harlech street.

Mr McNeilly said residents on the New Zealand street had to cope with a lot of tourists, especially from cruise ships at the nearby harbour.

"The background of Baldwin Street is that a town planner from back in the UK had no idea of the topography of Dunedin being very steep due to previous fault lines thousands of years ago so this street was just planned out.

"People have always lived on it, they've coped with the climatic variations that we have here, we have snow and ice, people love it because that side of the valley gets the sun, gets the view.

"It got a bit of worldwide attention when it got the record and every year it's become more and more popular.

"It's just a constant stream of tourists going there each day and that of course brings problems. I talked to a lady today who often has tourists wandering around her house taking photographs inside, around her garden, people think it's some kind of Disneyland attraction."