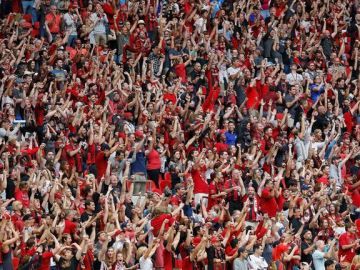 The most passionate hardcore football fans are at risk of experiencing dangerous levels of stress while watching their team play, a study has shown.

Researchers at the University of Oxford have now verified a scientific link between fans’ intense group bonding with their team and levels of cortisol while they watch football - and the link is stronger for women.

The study was conducted with Brazilian spectators during the 2014 World Cup, hosted in Brazil. The fans’ saliva was collected before, during and after matches, including Brazil’s historic semi-final 7-1 loss to eventual champions Germany.

"Cortisol rocketed during live games for the fans who were highly fused to the team," said Dr Martha Newson, researcher at Oxford University's Centre for the Study of Social Cohesion. "It was particularly high during games where their team lost.

The study, published in the journal Stress and Health, even suggests that stewards could be better equipped to identify which fans are most at risk of heart attacks.

Dr Newson said: "Clubs may be able to offer heart screenings or other health measures to highly committed fans who are at the greatest risk of experiencing increased stress during the game."

There are many health conditions tied to extreme stress that hardcore football fans should be aware of. While cortisol is essential to responding to life’s daily stresses, too much cortisol over time can result in a suppressed immune system, weight gain, and heightened blood pressure with a significant risk of heart disease. Indeed, previous research has established an increase in heart attacks among fans on important match days, at both the regional and national level.