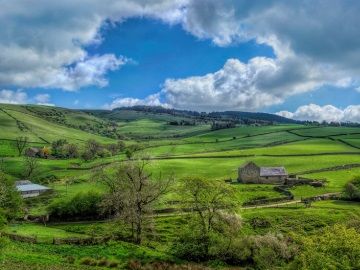 The “happiest places” in the UK have been revealed in a study that examined factors including life expectancy, crime rates and personal wellbeing.

Winchester, East Renfrewshire, Monmouthshire and Lisburn and Castlereagh came out on top in England, Scotland, Wales and Northern Ireland respectively, according to the research by Royal Mail.

The second and third spots were filled by Babergh, in Suffolk, and Rushcliffe, in Nottinghamshire, in England; East Renfrewshire and East Dunbartonshire in Scotland; Monmouthshire and the Vale of Glamorgan in Wales; and Lisburn and Castlereagh, and Newry, Mourne and Down in Northern Ireland.

People in Rushcliffe reported high levels of wellbeing, while East Renfrewshire scored in the 90th percentile across all local authorities in the UK for earnings.

Monmouthshire had the highest life expectancy and earnings in Wales, and good access to health services and low levels of carbon emissions boosted Lisburn and Castlereagh's score.

Data published by the Office for National Statistics in February suggested that while income and spending had increased across the UK in the last quarter of 2018 there had been a “levelling off” of people’s personal well-being, and that Britons’ perception of the future were more negative than they had been at the start of the year.

2. Newry, Mourne and Down

(With just 11 local authorities in Northern Ireland, a ranking of the top 5 provides a better analysis for happiness in the country, Royal Mail said)

Commenting on the national picture, Glenn Everett of the ONS said at the time: “Despite high levels of employment, rising incomes and spending across UK households, people are not reporting increases in their well-being.

This may be due to worries about rising debt repayments, which could be driving concerns about their future financial situation."