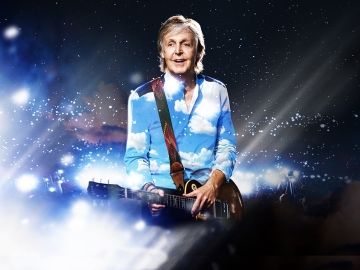 In July 1968, the Beatles convened at London’s Trident Studios to record their soon-to-be chart-topping single “Hey Jude.” Paul McCartney jotted down the lyrics on a sheet of paper, which he used during the session and later gave to a studio engineer. On April 10, that sheet of paper sold at auction for a staggering $910,000—several times more than its original estimate of $160,000 to $180,000.

According to Far Out Magazine, McCartney had begun writing the song earlier in the summer of 1968 on his way to visit John Lennon's first wife, Cynthia, and their son, Julian. Lennon had recently split from Cynthia after taking up with artist Yoko Ono, and the song was intended to reassure Julian, who was just 5 years old at the time, that things would turn out all right.

“It was optimistic, a hopeful message for Julian,” McCartney later explained in the TV docuseries The Beatles Anthology. “‘Come on, man, your parents got divorced. I know you’re not happy, but you’ll be OK.’”

At its inception, the track was titled “Hey Jules,” but McCartney changed it to “Hey Jude,” a combination of Jules and Jud—a name that McCartney had liked after hearing it in the musical Oklahoma! The song resonated with Lennon, too, who interpreted the lyrics “Go out and get her” as a blessing from McCartney to pursue his new relationship, even if it came at the expense of their own creative partnership.

Considering the rich backstory, it’s perhaps unsurprising that McCartney’s handwritten lyrics were the top-selling item at last week’s “All Beatles” auction, a live online event hosted by Julien’s Auctions. Other lots included a Ludwig bass drumhead with The Beatles printed on it from the opening night of their first North American tour in August 1964 (which fetched $200,000), and a shooting script page for their 1967 “Hello, Goodbye” music video with handwritten sketches and notes by Lennon, George Harrison, and road manager Mal Evans (which sold for $83,200).