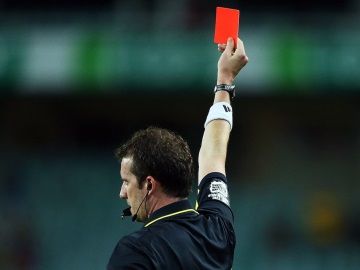 Mistaken identity, farting and more: Football's craziest red cards. Eintracht Frankfurt’s David Abraham received a red card on Sunday for taking out SC Freiburg manager Christian Streich. The Frankfurt captain barged into Streich and knocked him flying, which sparked chaotic scenes from both benches. Frankfurt lost the Bundesliga encounter 1-0, but the fixture will only be remembered for Abraham’s crazy antics. So following the red card, we’ve decided to take a look at some more crazy dismissals.

Bowyer and Dyer clash
Lee Bowyer and Kieron Dyer took crazy red cards to a whole new level when they were both dismissed for fighting each other in 2005. The Newcastle midfielders had to be separated by teammates and opposing players after they began to brawl at St James’ Park.

Hazard and the ball boy
When a Swansea ball boy fell on top of the ball and refused to give it to Eden Hazard during a League Cup encounter in 2013, the Belgian took action into his own hands and forcefully kicked both the ball and the youngster. As expected, Hazard received his marching orders.

Zidane's headbutt
One of the most famous red cards came in the 2006 World Cup Final. France legend Zinedine Zidane reacted angrily after Marco Materazzi insulted Zidane’s family, so he decided to headbutt the defender, ending the final game of his career with an early shower.

Poll makes Simunic blunder
Earlier in the 2006 World Cup, referee Graham Poll had a game to forget when he took charge of Croatia against Australia. The Englishman booked Croatia’s Josip Simunic twice but didn’t send him off. Simunic was then given a third yellow card after the game for dissent, which eventually resulted in his dismissal!

Mistaken identity
When Arsenal’s Alex Oxlade-Chamberlain blatantly handled the ball on the line against Chelsea in 2014, no one could argue about the incoming red card. However, referee Andre Marriner was adamant that defender Kieran Gibbs was the guilty man and brandished the red card his way!

Beckham's Argentine swipe
One of England’s most famous dismissals came in the 1998 World Cup. David Beckham was at the centre of the red card after he kicked out at Diego Simeone right under the referee’s nose. England would eventually go on to exit the competition, with many blaming Beckham.

Suarez's late save against Ghana
Luis Suarez has never been the most loved footballer on the planet, and when he controversially handled the ball on the line against Ghana in the 2010 World Cup quarter-finals, his popularity didn’t exactly increase. Ghana missed the resulting penalty and eventually exited the competition on penalties, with Suarez’s antics the main talking point.

Gbale's cheeky celebration
Dally Innocent Gbale netted a late equaliser for Portuguese second division side Freamunde back in 2014 and celebrated by pulling down his shorts in response to racist chanting from opposing fans. Unfortunately, the referee had no choice but to send him off.

Mascherano's medical kick out
Javier Mascherano is known for his crazy antics on the pitch, so there’s no surprise to see him on this list. During a 2014 World Cup qualifier against Ecuador, Mascherano was in the process of being replaced due to an injury, however, he decided to kick the medical car driver which resulted in a melee and his dismissal.

Dzeko pulls players shorts down
Another dismissal involving a player’s shorts coming down came in 2016, this time involving Bosnia & Herzegovina captain Edin Dzeko. The striker pulled Sokratis Papastathopoulos’ shorts down and received a second yellow for his actions. Sokratis also received his marching orders for his reaction to the striker’s cheeky foul.

Neymar's mask celebration
Before Neymar’s move to Barcelona, he was making his name known at Santos. The Brazilian was finding the back of the net for fun, but when he celebrated a goal by putting a mask of his own face on upside down, he received a second yellow and headed for an early shower.

Dzeko's disgusting spit
Edin Dzeko appears on this list for a second time, however, this one was far more serious than his earlier short stripping. Earlier this year, the striker was sent off for an apparent spit at referee Gianluca Manganiello following an argument.

Alvarado takes down pitch invader
Pitch invaders are a rarity in football, but when one Ajax supporter managed to run onto the pitch, AZ Alkmaar goalkeeper Esteban Alvarado decided to take things into his own hands by stopping the intruder in his tracks. However, the referee wasn’t having Alvarado’s efforts and sent him off for kicking out at the fan.

Dursun's dig backfires
When referee Deniz Bitnel dropped his red card on the floor during Trabzonspor’s heated Super Lig fixture against Galatasaray, Salih Dursun decided to pick it up and brandish it in Bitnel’s face. It proved to be a costly move, with the ref then dismissing Dursun for his dig.

Ljungkvist sees red for farting
We thought we’d save the best until last. During a game between Jarna SK’s reserves and Pershagen SK, Swedish defender Linden Ljungkvist received a second yellow card for farting. The referee deemed the incident “unsportsmanlike behaviour” and Ljungkvist had to make his way off the field.