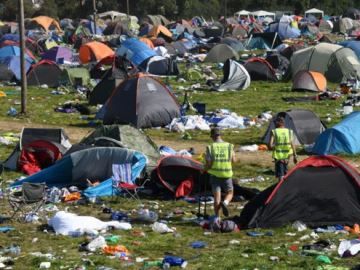 Festival-goers should be charged a £25 deposit to camp at Reading and Leeds, say campaigners who want to stop so many tents being abandoned every year.

After the Bank Holiday festivals, photos emerged showing fields strewn with litter, nearly-new tents, airbeds and even an upright gazebo.

Clean Up Britain is now proposing campers pay a deposit which is returned only if they take their tent home.

The average tent is mostly made of plastic - the equivalent of 8,750 straws or 250 pint cups, according to the Association of Independent Festivals.

But festival-goers often find themselves too tired and emotional after a weekend partying to take the time and effort to pack up their belongings - and their tent.

John Read, founder of campaign group Clean Up Britain, told the BBC: "This is heartbreaking and such a waste of resources - it should not happen.

"You see a lot of people saying they care about the environment but their words and actions don't match up."

He described it as a "glorified form of flytipping", as people were just leaving the mess for someone else to clean up.

He believes a pitch deposit - or "tent tax" - would be a good financial incentive to take tents home - and is keen to speak to festival organisers about introducing his idea.

He said his group thought it should be fixed at £25 - but others have told him it needed to be higher.

Any money made could go into redistributing abandoned tents to homeless charities, scout groups and local community groups, he said.

Mr Read is also calling on Reading and Leeds festival organisers to do more to disseminate an environmental message about littering and waste in general.

It is not known how many tents - many of them virtually brand new - were left behind at the festivals this year.

Charity group, Festival Waste Reclamation and Distribution, which collects unwanted equipment from festivals across the UK, says thousands of tents are abandoned every year, many of them ending up in landfill.

Its volunteers are allowed onto sites to salvage sleeping bags, roll mats, tents, clothes, waterproofs and blankets, once everyone has left. These are then given to the most vulnerable in society, including Syrian refugees.

Some festival-goers do seem to be getting the littering message.

Earlier this summer, Glastonbury Festival organiser Emily Eavis tweeted that 99.3% of all tents were taken home, which were "record numbers".

And people have been having conversations on social media about what more can be done.

Laurel Waldron tweeted: "Pretty grim seeing scenes of the tonnes of mess left by revellers. If everyone at Glastonbury managed to clean up after themselves - what the hell was the excuse?"

And Joanne Spencer tweeted: "I went to my first festival at 16 and I packed everything and took it with me, including putting my rubbish in the bin.! Leave only footprints!"