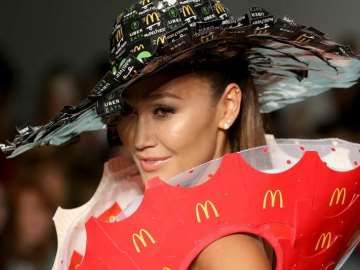 You may love their indulgent food, but you've probably never considered wearing some McDonald's merch.

But all that could be about to change, as the fast food giant has unveiled its first range of branded apparel.

The collection, which comprises 20 pieces, take inspiration from the iconic McDonald's logo and fast-food favourites, such as the hamburger.

The range is currently only available to buy in America, but we have high hopes that it will soon join us on the other side of the pond.

While this is McDonald's first fashion collection, its branding has made several sartorial appearances over the years; most notably during Moschino's autumn/ winter 2014 show, where the Italian house's creative director, Jeremy Scott incorporated red and yellow looks featuring re-imagined McDonald's logos and handbags resembling Happy Meals.

Earlier this year, Vetements also showed its love of McDonalds, as its former head designer, Demna Gvasalia chose the Champs-Élysées branch of the fast-food chain in which to host the fashion brand's spring/ summer 2020 show. Attendees nibbled on French fries and the show notes were printed on McDonald's napkins.

McDonald's was founded in 1948 by brothers Maurice and Richard McDonald.