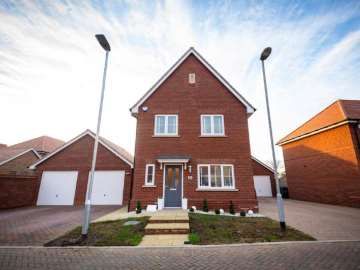 A family is engaged in a legal fight with a housing developer after two lampposts were installed in the front garden of their new £400,000 home.

Developers Crest Nicholson constructed a lamppost in their front garden two months later, only realising afterwards they had erected it on the wrong side of the front door.

However, while dealing with the mistake, Mr Price, who works in public services, and his wife, who works in banking, discovered their lawn was 90cm shorter than promised.

Mr Price said Crest Nicholson offered the family £15,000 in compensation for the lost garden space and to buy a strip of land the council needed to maintain the lamppost.

But after Mr Price raised concerns about how much of his lawn would be lost to paving around the post, he said the developers withdrew the offer.

He claimed the firm said later it had agreed a deal with Essex Highways for a strip of land that meant it no longer needed to purchase any from the family.

While he was at work, builders put up a second lamppost on the other side of the lawn - just 4m away from the first one.

In response, Mr Price has parked his car directly in front of both lampposts to stop Crest Nicholson removing the wrongly placed first one and wiring in the second.

He insists he will not back down until the developer pays him for the missing land.

For now, the family are stuck with two lampposts in their front garden.

Mr Price said: “I’m fuming about it. The whole situation has caused us a huge amount of upset and stress.

“I’ve been petrified that they will just turn up at my house when I’m at work and dig up my front garden. This is not how you treat someone who has just bought an expensive house.

“We are in a stand-off with them now. They won’t pay us for the loss of land so I am trying to stop them from finishing the work until they pay.

“We wouldn’t be in this position if they put the lamppost in the right place to begin with.

“They are a massive eyesore and none of the other residents are happy about having to look at two massive lamp posts right outside their windows.

“We feel like we have been bullied. They have gone ahead and carried on with the work at every cost, no matter what that means to us.”

A spokesperson for the developers said: "After careful investigation, a solution has been found by placing the street lamp column on land that Crest Nicholson owns, outside of Mr and Mrs Price’s property.

"When marking out the new street lamp, Crest Nicholson briefly crossed over into Mr and Mrs Price’s front garden.

"We apologise for any upset this might have caused and have previously written to the residents to express this.

"The new lamppost has now been installed and we await Mr and Mrs Price’s consent before removing the old post from their garden.”