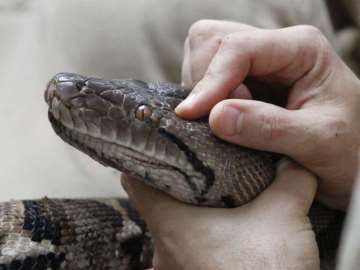 A huge python that escaped and was on the loose in Cambridge has been found and reunited with its owner. The 9ft snake, called Turin, was spotted in a tree near its home in the north of the city after a five-day hunt. Police had been searching for the reptile, a reticulated python, since the early hours of Sunday.

Reticulated pythons are the world’s longest snake are native to south-east Asia and can grow up to 31.5ft in length.

They are not venomous but are known to wrap around their prey and suffocate them.

Turin was spotted up a tree at about 7pm on Thursday by one of its owner's neighbours just metres away from its home in Lovell Road.

The snake's owner said he believed Turin was okay but had scratches, scrapes and a swollen gum.

He told the BBC that he planned to take the male reticulated python to a vet for a check up.