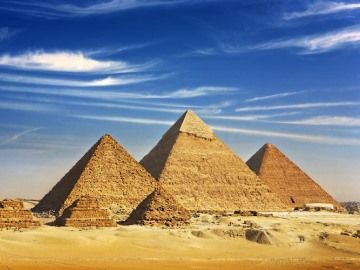 Say what you like about lockdown, it encourages exploration. This week the Egyptian Tourist Board invited the world into the 5,000-year-old tomb of Queen Meresankh III: free entry instead of the usual charge of 50 Egyptian pounds (around £2.50) and not a single tour group jostling for space.

The tour is one of four virtual trips of historic Egyptian sites being promoted during lockdown. Beefed up with 3D modelling by Harvard University, this is true vicarious travel, offering a tangible sense of one of the finest tombs in antiquity plus information and computer reconstructions at a click. Just crank the central heating up to max for desert realism.

Hewn from the bedrock, the tomb was excavated in 1927 by Harvard’s George Andrew Reisner. Hieroglyphs established it as that of Meresankh III, daughter of fourth dynasty Prince Kawab and Hetepheres II, granddaughter of the Great Pyramid builder Cheops. The American archaeologist was wowed by the quality of its painting. “None of us had ever seen anything like it,” Reisner wrote later in the Bulletin of the Museum of Fine Arts.

On either side of the entrance, fine bas-reliefs daubed with earthy, 5,000-year-old pigments capture the tomb’s preparation. Sculptors chisel funerary monuments. Hunters net waterbirds and a line of servants bears baskets of offerings. Intended to sustain Meresankh’s soul in the afterlife, they are a snapshot of life five millennia ago.

Wearing a white robe, the queen is pictured on an opposite wall and as a statue, arm in arm with her mother, in an antechamber west of the entrance. Ancient Egyptians interpreted the setting of the sun in the west as the gateway to the dead – and beneath a panel of bakers shaping triangular loaves, wooden steps drop into the tomb’s guts.

The only soundtrack that can do justice to a virtual descent down the tomb’s five-metre burial shaft is the theme from Indiana Jones. Chisel marks remain visible on the walls. The light fades to crepuscular gloom. The route ducks under a low entrance into the chamber where Reisner found Meresankh’s black granite sarcophagus.

A tab in the lower left corner provides a rotatable 3D model of the tomb.

If this tour is a teaser to inspire future visits, that of the Mosque-Madrassa of Sultan Barquq is a glimpse of a sight off-limits to tourists. On Cairo’s historic thoroughfare, Sharia Al Muizz, the 14th-century religious school hints at the medieval glory of a city which flowered through trade between east and west.

Other tours visit the Coptic Red Monastery in Upper Egypt, its frescos of doe-eyed Coptic saints Egypt’s best, and the Ben Erza synagogue – founded, the story goes, on the site where Moses was discovered.