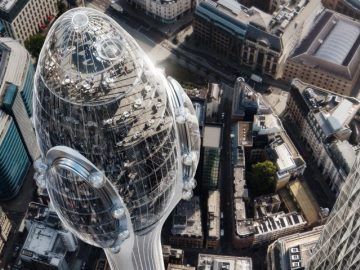 The controversial Tulip skyscraper in the City was granted planning approval today despite huge concerns about its impact on historic views of London.

The decision by the City of London Corporation’s planning committee paves the way for the 305.3-metre high structure on Bury Street, which will be western Europe’s second tallest building after the Shard.

It is forecast that 1.2 million people a year will visit the Foster + Partners designed slender tower.

In the “bud” at the top it will have 12 publicly accessible storeys including a viewing platform with rotating pods, a restaurant and sky bar and an entire floor dedicated to education facilities.

Chris Hayward, chairman of the Corporation’s planning committee, said: “After a lengthy and robust debate, the committee agreed to approve this truly unique visitor attraction.

“One of my key objectives as Chairman of the Planning and Transportation Committee has been to enable the continued transformation of the City of London into a place which welcomes members of the public on weekends as during the week.

"This building has the potential to play an important role in realising our vision of the Square Mile as a vibrant 24/7 city.”

However, heritage bosses were dismayed by the decision, which will still have to signed off by Mayor Sadiq Khan.

Duncan Wilson, chief executive of Historic England, said: “This building – a lift shaft with a bulge on top – would damage the very thing its developers claim they will deliver – tourism and views of London’s extraordinary heritage.

“The setting of the Tower of London, a symbol of the city not just to millions of Londoners but to the whole world and one of our most visited places, will be harmed.

"It has already been damaged by the Walkie Talkie and it would be a great shame if that mistake was repeated.”