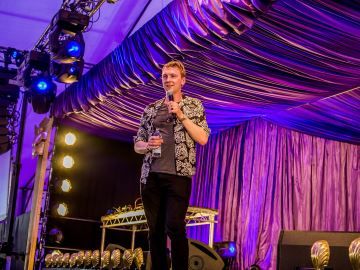 A comedian says he has legally changed his name to Hugo Boss in defiance of the luxury German designer targeting small businesses and charities who use the name "boss".

Joe Lycett posted a letter on Twitter with the UK Deed Poll Office's letterhead, which commits him to "absolutely and entirely renounce, relinquish and abandon the use of my said former name".

The 31-year-old said he will be launching a "brand new product as Hugo Boss", with all details to be revealed on a new series of his consumer show Got Your Back on Channel 4.

He tweeted: "So, Hugo Boss [who turnover approx $2.7 billion a year] have sent cease and desist letters to a number of small businesses and charities who use the word 'BOSS' or similar."

Lycett, who has appeared on Never Mind The Buzzcocks and Live At The Apollo, said a small brewery in Swansea has had to spend thousands of pounds on legal fees and rebranding.

Boss Brewing, according to WalesOnline, was left with £10,000 in legal fees last year after the fashion brand sent it a cease and desist letter when the brewer tried to register its brand.

In 2018 a charity called DarkGirlBoss received a legal letter from Hugo Boss when it tried to trademark its name, according to the i paper.

The company famously produced the SS uniforms for the Nazis during the Second World War using forced labourers, with its eponymous founder being a long-time Nazi Party member and supporter of Adolf Hitler.

In 2011, Boss issued a statement apologising for the "harm or hardship" at the factory run by them at the time.

Lycett, whose new name was trending on Twitter on Sunday, also tweeted: "Hugo Boss did not historically manufacture uniforms for the Nazis.

"Sorry, THIS Hugo Boss did not historically manufacture uniforms for the Nazis."

Sky News has contacted Hugo Boss, the fashion house, for a comment.