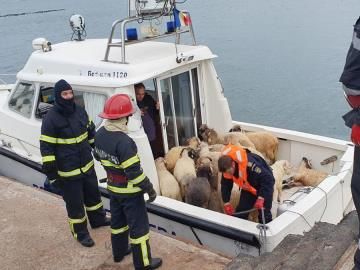 A ship carrying almost 15,000 sheep overturned on Sunday in the Black Sea near Romania, according to news reports, setting off a desperate effort to rescue the animals and renewing a focus on the livestock shipping industry, which has been previously criticized for its treatment of animals.

It was not immediately clear what caused the ship, the Queen Hind, to overturn near the port city of Constanta shortly after it departed for Saudi Arabia.

The ship’s crew — 20 people from Syria and one from Lebanon — were all rescued, Ana-Maria Stoica, a spokeswoman for the rescuers, told Agence France-Presse.

The fate of the sheep was less certain. Ms. Stoica said 32 sheep had been rescued, including two that were in the water.

“The rescue operation is ongoing,” she said. “We hope that the sheep inside the ship’s hold are still alive.”

It was not clear which shipping company was operating the vessel. The Romanian rescue team could not immediately be reached on Sunday night.

The Queen Hind was built in 1980 and is more than 270 feet long, according to MarineTraffic, a website that tracks shipping information.

Pictures of the ship posted online showed it on its side, tethered to a smaller boat, with the animals’ legs and other body parts dangling out of an enclosed area. Videos showed rescuers carrying about a dozen of the sheep in the back of another smaller boat.

It is possible the sheep were destined to be slaughtered in Saudi Arabia in accordance with Islamic guidelines known as halal, one livestock expert said. But she questioned whether there was a more humane way to procure that many sheep.

“What they’re doing on those ships I couldn’t even comprehend,” said Susan Schoenian, a sheep and goat specialist at the University of Maryland Extension.

Ms. Schoenian noted there were certified halal slaughterhouses in the European Union, which includes Romania.

“Why move live animals when you can slaughter them and move meat?” Ms. Schoenian said. “It can be certified halal. It would provide jobs for Romanians.”

Ms. Schoenian said transporting that many sheep was a logistical challenge, and that while the sheeps’ survival instincts could have kicked in after the ship overturned, they would have most likely been weighed down in the water by their long fleece.

“The average person doesn’t understand — when you transport animals, you don’t want to pack them in like sardines,” she said. “But we also don’t want to give them too much room.”

About 70,000 sheep are exported from Romania every year, particularly to countries in North Africa and the Persian Gulf, according to an August resolution from the European Parliament calling for Romania to improve treatment of the animals.

In April 2018, a video emerged showing thousands of sheep dying from heat stress onboard a ship traveling from Australia to the Middle East, prompting the Australian government to investigate.

It isn’t uncommon for large shipments of live sheep to be transported to the Middle East, Richard Ehrhardt, a small ruminant specialist and animal science professor at Michigan State University, said on Sunday.

Mr. Ehrhardt said fewer links in the supply chain could give people greater confidence that their halal meat had been slaughtered in keeping with religious customs.

Sheep are not strong swimmers and will sometimes drown in much smaller bodies of water because of their thick fleece, he said.

“They’re kind of waterlogged,” Mr. Ehrhardt said. “I wouldn’t think they’d have a very good chance of survival for very long at all.”

It is rare for ships carrying livestock to overturn, said Keith Belk, a professor who leads the animal science department at Colorado State University.

Mr. Belk said the international livestock shipping industry had improved its treatment of animals over the past 20 to 30 years, partially in response to “huge news stories” of animals being mishandled.

He said Australia, for example, has put into place requirements on how much space there should be for animals on the ships, how much food and water the animals should get and what temperature levels were acceptable.

“I would say it’s much improved, particularly over how visual this has been over the last five or 10 years,” he said. “I know that despite there not being any international standard that I’m awareof, there’s been significant emphasis placed on how the animals are handled in the shipping systems.”