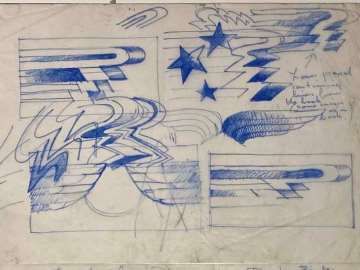 Drawings for Paul McCartney’s “magic” psychedelic piano may ­conjure up £2,000 for a builder.

The papers saved from a skip near Manchester by Andy Clynes, 54, were in his loft for 20 years.

The designs, valued at a total of £10,000, listed jobs for an art collective, including for Sir Paul’s “magic” piano.

The piano designs are being auctioned in Newton Le Willows, Lancashire, on March 24.

Auctioneer Paul Fairweather said it is fantastic for the vendor that it had proved “a lucrative decision to save them from the skip.”

Mr Clynes was overseeing a development of a mill into a wine bar near Manchester when the papers were thrown out with other waste.

He took them out of the skip and stored the papers in a box in his loft for around 20 years until deciding recently to see what they are worth.

An auction house is now selling the highlight of the find, the sketches and designs for the Beatle’s so-called “magic” piano.

More of the papers from his find will go under the hammer in a separate sale later this year at Omega Auctions, with the total expected to fetch £10,000.

Mr Clynes said: “I picked them out of the skip. The case burst open as it was thrown in. It was raining and I just picked up what I could.”

“I imagine there was a lot more there but it was damaged.”

The papers document a handwritten list of commissions for 1960s art collective BEV.

Douglas Binder, Dudley Edwards and David Vaughan, a pop-art ‘collective’ that were known as BEV, were originally based in a studio in an old disused factory in the Chalk Farm area of London on a site opposite the home of fashion photographer David Bailey.

Among the find were details of commissions for The Kinks - the collective worked on their album cover Sunny Afternoon - Lord Snowdon, Guinness heir Tara Browne and Sir Paul.

Collective member Dudley Edwards painted the psychedelic motifs on to the star’s piano in 1967.

To this day, he does not know why they were there.

“It could have been an art studio at some time or another,” he said.

“I’ve had them for 20-odd years. You put things away and forget about them and then something triggers your mind.

One of the items included in a list of commissions says “to paint Paul McCartney’s piano”.

Auctioneer Paul Fairweather described the papers as a “rare find”.

“It’s fantastic that such an important archive was recovered and evenbetter for our vendor that it should prove a lucrative decision to save them from the skip,” he said.