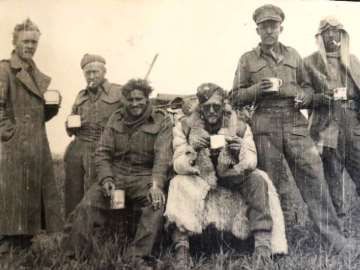 An extraordinary wartime archive that belonged to an early member of the SAS has sold for £25,000.

Private Fred Casey was among the original dozen members of the 1st Special Air Service that was formed in North Africa to wreak havoc behind enemy lines.

The commando’s military possessions included a photo album containing previously unseen images of the original members of the elite force.

These included Captain David Stirling who formed the “Who Dares Wins” regiment and hand-picked the men under his command.

Others show Corporal Jack Sillito who spent eight days walking through the desert with no water after getting separated from his unit in 1942.

Pte Casey was dropped behind enemy lines with the SAS in North Africa, Italy and France, taking part in operations to blow up airfields, supply depots and communications links.

The Nazi forces regarded the unit as so dangerous they ordered the execution of any commandos who were captured and 35 were killed in 1944 in German-occupied France.

Pte Casey, from Brighton, East Sussex, survived the war and was personally awarded the Certificate of Gallantry by Field Marshall Bernard Montgomery.

His archive has been sold by militaria auctioneers Bosleys of Marlow, Bucks.

Pte Casey served in the Territorial Army before the war and then joined the 4th Battalion Royal Sussex Regiment part of the 133rd Brigade, 44th (Home Counties) Division. He was the boxing champion for three years.

When war broke out he trained as a commando and saw action with the British Expeditionary Force in Europe and was evacuated from France on May 30, 1940 as part of the retreat of Dunkirk.

In 1941 he joined 8 Commando and served in Egypt before going on to join the SAS. He served across Europe and was posted in Norway when the war ended.

He then left the military and became a parquet floor layer. He married wife Buddy and they had two sons.
Casey died in 1997 aged 81.