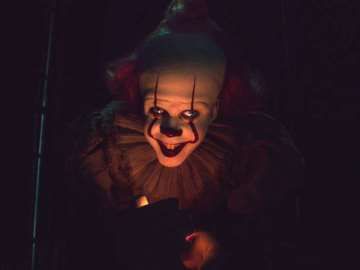 Warner Bros has been censured after an advert featuring the evil clown Pennywise from the horror movie It appeared during a children's lullaby playlist on Spotify.

A listener complained after hearing the Stephen King character, voiced by Swedish actor Bill Skarsgard, between songs played to their child on the music streaming service.

The ad for last year's It Chapter Two film appeared during the Classical Lullabies playlist - which included the songs Children's Music No.1: I. Lullaby, 5 English Nursery Tunes and For Children Vol 1.

The Advertising Standards Authority (ASA) found it breached its code and told Warner Bros to ensure unsuitable ads did not appear in media designed for youngsters.

A ruling published on Wednesday said: "The ad began with a cinematic drum noise and a crescendo of high-pitched percussive sound, which the ASA considered immediately created the feeling of suspense.

"The sound continued through the ad, while the voice of the film's villain Pennywise stated, 'For 27 years, I dreamt of you. I craved you' in a deep tone.

"He then shouted, 'Oh I missed you' in a loud and desperate manner as the ad built to a climax with a sharp snap of a second drum, at which point another of the film's characters stated 'Pennywise', and the sound of laughing clowns followed.

"We considered those elements meant the ad was likely to cause distress to young children, and that it should have been appropriately targeted to avoid the risk of them hearing it."

Warner Bros said the ad, which might have been "perceived as mildly scary", was aimed at people aged 18 to 44.

The firm said it had used parameters, including one known as "No Kids Music", in an attempt to ensure it was appropriately targeted.

Spotify said the parameters used were appropriate and that the playlist was not designed primarily for children.

The ASA accepted Warner Bros had taken steps to target the ad responsibly but said it had been "inappropriately targeted" because it appeared around content likely to be heard by young children who were likely to be distressed.

The ruling said: "We told Warner Bros Entertainment UK Ltd to ensure that future adsthat were unsuitable for children did not appear in media which was designed primarily for children."