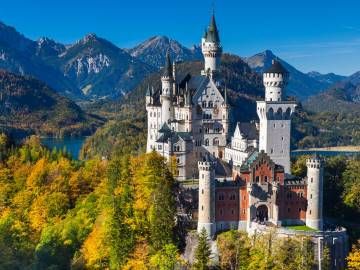 If you've always wanted to soak up some history and visit some of the most breathtaking castles in the world then now is the perfect time. We don't mean physically leaving your house to travel the world - that would be going against government guidelines preventing the spread of coronavirus, not to mention a very pricey endeavour! Instead, sit back and take a look through our roundup of virtual tours that will make you feel as though you're a royal wandering through the halls of your regal residence.

Let's face it, we'd all love to be able to call Windsor Castle home. But while we wait patiently for our invite from the Queen, we can take a look around the impressive fortress online. Not only is it the largest occupied castle in the world, but it is also where Her Majesty often spends her weekends and Easter breaks - she is even currently self-isolating there with her husband Prince Philip amid the coronavirus crisis. While you won't be able to catch a glimpse of the Queen on the tour, you can see the traditional State Banquet in St George's Hall, the Waterloo Chamber and the Crimson Drawing Room.

Like other tourist attractions, Prague Castle is currently closed to the public, but the website has given the public a chance to wander inside its walls from afar using the virtual tour. It may not look like a traditional castle from the outside, but it has a long history dating back to the 9th century and is even believed to be the largest ancient castle in the world. Visit the Cathedral of St. Vitus, Powder Bridge and the Royal Garden amongst others.

As one of Scotland's most popular tourist attractions, Edinburgh Castle is just as majestic as you would imagine, helped by its location at the top of Castle Rock. From seeing Mary, Queen of Scots' initials above the door of the Royal Palace to catching a glimpse inside St. Margaret's Chapel - named after Queen Margaret who died in the Castle - there is plenty to see on this virtual tour. Plus, from the comfort of your own home you get to soak up all the history without risking the unpredictable Scottish weather!

Instead of a plane ticket and time off work, all you need to visit the Chambord Castle in France is a laptop. Built in 1519 at the request of François I, the château of Chambord has become symbolic of the French Renaissance in Europe. Although it was not intended to be a permanent residence, the carefully constructed architecture - including the double helix staircase inspired by Leonardo da Vinci - would have you believe otherwise.

Built in 1446 by Dermot McCarthy, King of Munster, Blarney Castle is the third castle to be built on the site. It is perhaps most well-known as being home to the Blarney Stone, also known as the Stone of Eloquence. Legend has it that kissing the rock means you'll never again be lost for words - so we can see why tourists flock to the Irish landmark! While you can't physically pucker up, you can see what all the hype is about online. As well as Blarney Stone, virtual tours are available for the Castle, Poison Gardens, Battlements and even the caves and dungeons.

Viewing Neuschwanstein Castle creates the surreal experience you are stepping straight into a fairytale, and who wouldn't want that in the current climate? The castle was built by Ludwig II of Bavaria, known as The Fairy-Tale King, who attempted to create his own castle inspired by Richard Wagner's opera Lohengrin. Just looking at the gorgeous exterior is enough to calm your nerves!

See the former home of French royalty with a three-part tour on Google Arts & Culture. Whether you're interested in hearing fun facts about Versailles or want to view the art in the Palace, this tour will prove that the interior of the palace is just as gorgeous as the exterior. Our personal favourites are the breathtaking theatre and the incredible Hall of Mirrors, with 357 in total.

This Milanese castle was built in the 14th century by the Visconti family and became their official residence. It has undergone a number of restorations since then and the finished result includes marble hallways, historic battlements and the Museum of Ancient Art. As well as a whopping 12 virtual tours of the impressive building on Google Arts & Culture, you can also learn more about individual artworks with 288 insights from castle experts.