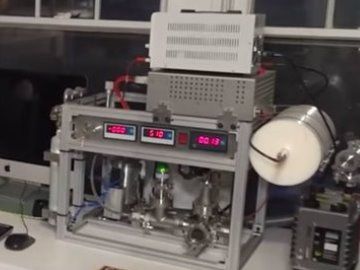 The teenage genius told Fox News: “The start of the process was just learning about what other people had done with their fusion reactors.

“After that, I assembled a list of parts I needed. I got those parts off eBay…”

“Often times the parts that I managed to scrounge off of eBay weren't exactly what I needed.

“So, I'd have to modify them to be able to do what I needed to do for my project.”

The device uses 50,000 volts of electricity to spin up a coil to speeds some ten times faster than jet engine turbines.

Jackson’s parents were happy to support his work, but he now says he wants to start an organisation to help young people whose parents can’t afford to support their research.

But that may have to wait a little while. While Jackson’s device successfully achieved nuclear fusion – combining two atoms of deuterium gas and ejecting a neutron – no-one has yet built a fusion reactor that generates more energy than it uses

“That,” Jackson ruefully admits, “is why I’m not a billionaire.”

Chris Oswalt, Jackson’s dad, said he allowed his son to work on the project but ensured his safety by having experts speak to him about the hazards of working with radioactive materials very high voltage electrical systems.

Nuclear fusion, the same process that powers stars, could one day provide a clean and safe alternative to fossil fuels and nuclear fission. Current scientific estimates predict a working nuclear fusion plant should be built in the next 30 to 60 years.