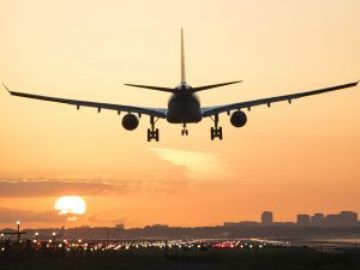 More than 11 million journeys were made between the two South Korean airports in 2015, the International Air Transport Association (IATA) reports. Second on its list is Sapporo-Tokyo Haneda, way behind with 7.8m. New York-Washington DC and London-Paris don’t even make the top 10.

So what the devil is Jeju, and why are so many rushing to see it? It’s actually the capital of an island, Jejudo, which might just be the most popular holiday destination you’ve never heard of.

There are several ways to judge a carrier’s size, and most of the time American Airlines tops the charts:

But when it comes to number of countries served, American doesn’t even make the top 10.
Turkish Airlines is number one, with 115.

That’s 22 more than its nearest rival. Why? Turkey’s position at the crossroads of Europe, Asia and Africa is surely the answer.

A poll of around 28,000 readers last year found that almost half of you didn’t know which is the world’s busiest airport, despite the fact that it has topped the charts since 1998.

Yes, it’s Hartsfield-Jackson Atlanta International, with more than 101 million. Number one for international passengers, for the record, is Dubai .

4. Places you can’t fly to direct from Britain

There are some strange ones on this list, including three European capitals: Sarajevo, Yerevan and Berne (flying to Andorra, Liechtenstein, Monaco, San Marino and Vatican City is impossible too, as none have an airport), the beautiful German city of Dresden, Tromso, Norway’s gateway to the Northern Lights, a clutch of African countries (including Namibia, Senegal and Mozambique), a handful of major Asian cities like Xi’an and Osaka, and almost all of South America (Guyana, Suriname, Venezuela, Uruguay, Paraguay, Bolivia and Ecuador are all without a non-stop link to the UK).

Another Indian airline is giving IndiGo a run for its money, however:  SpiceJet . In December 2014 the low-cost carrier was on the brink of collapse following five consecutive years in the red (culminating in an annual loss of $159m - £122m - for that year), but since then its stock has risen more than 800 per cent, giving it a market value of $1.2 billion (£0.9bn). According to Bloomberg, no airline on the planet is performing so strongly, and earlier this year it announced a huge order for 100 new Boeing jets.

Further east, there's another little-known airline making giant strides.  Lion Air, a budget Indonesian operation that flies predominantly in and around south-east Asia, has a whopping 443 aircraft on order – more than any other carrier.

Did you guess Newquay? Stop telling porkers. The Cornish hub welcomed 370,247 passengers in 2016 – 47.9 per cent more than in 2015. Only Dundee, one of the country’s smallest airports, which handled just 37,632 fliers last year, can top it for speedy growth.

For the record, the fastest growing airport on Earth is Dubai, followed by Shanghai Pudong, Bangkok Suvarnabhumi and Chengdu Shuangliu.

According to recent report by FlightStats, using data from 2016, the unwanted accolade goes to Hainan Airlines. Just 30.3 per cent of its flights arrived on time.

Top of the class is KLM, with a punctuality rate of 88.5 per cent.

8. The airport with the least cancellations

Surely somewhere at the forefront of technology, like Singapore or Tokyo? Not according to OAG’s figures for 2014, which highlight Panama City Tocumen International as the best of the bunch with a cancellation rate of 0.07 per cent.

Few will be shocked to see KLM top the charts (founded October 7, 1919), but there are a few surprising entries in the top 10 .

And the world’s oldest airport? That’s College Park Airport in Maryland, US, up and running since 1909.

Which air route welcomes more first class fliers than any other? New York to Paris? Dubai to Hong Kong? LA to Tokyo? You’re not even close.

According to aviation number crunchers OAG, the greatest number of uber-rich travellers are ferried between the Iranian cities of Tabriz and Tehran by little-known ATA Airlines.

It counted 35,646 first class seats for the month of June 2015 (more recent statistics are not available). That places the route ahead of Beijing-Shanghai (served by China Eastern and Air China for a combined total of 34,939, Orlando-Atlanta (Delta, with 10,642) and Tokyo-Sapporo (10,232).

ATA is hardly renowned in the world of luxury travel. Based in Tabriz, it serves destinations in eight countries (Iran, Iraq, Georgia, Bahrain, Azerbaijan, Turkey, Kuwait and Saudi Arabia) and has an ageing fleet of 10 aircraft, including six MD-80s (out of production since 1999).

Would you feel uneasy about flying on a plane built in 1970? Harold Wilson was enjoying his first stint at Number 10, George Best was in his free-scoring pomp, and man's first small step on the surface of the moon was still fresh in the memory.

Almost 50 years on, Air California has long since folded, Harold Wilson and Bestie have shuffled off this mortal coil, and Nasa is hoping to start a colony on Mars. But 20335 is still going strong in the services of Airfast Indonesia, under the registration PK-OCG.

Its journey from Orange County to Jakarta has been a circuitous one. It had a couple of stints in Hawaii with Aloha Airlines, spent two years with Ohio-based PSA, six months with now-defunct Dallas outfit Braniff, and even enjoyed a spell with behemoth American Airlines. Since 1991, however, it has been in the services of tiny Airfast Indonesia, based in the city of Tangerang, which serves around a dozen domestic destinations, including Jakarta, Surabaya and Denpasar. At 47 years, it is, as far as our research can judge, the world's oldest passenger plane still in service .

12. The world's most powerful airline brand

Delta? Emirates? BA?! Nope, it's Aeroflot, the Russian carrier once the butt of jokes about lax safety and inebriated pilots. Brand Finance, which in February unveiled its annual Global 500 list, topped by the likes of Lego, Google, Nike, Ferrari and Visa, said Aeroflot outshines the biggest carriers in the US and Middle East with an AAA brand rating. While nine other airlines can boast the same triple-A score, the firm singled out Aeroflot as the most “powerful” of all, highlighting its sponsorship of Manchester United, its young fleet, and its heavy investment in marketing, particularly in Asia.

13. The fastest passenger plane in the sky

Forget the high-tech 787 Dreamliner. The fastest commerical jet is actually the good old 747 jumbo, which most airlines are phasing out of their fleets. The swiftest of all the 747s is the 747-8i, which has a cruising speed of Mach 0.86, but is only currently used by three operators: Lufthansa, Korean Air and Air China. To be fair, this is only a tiny bit faster than the 787, which flies at Mach 0.85