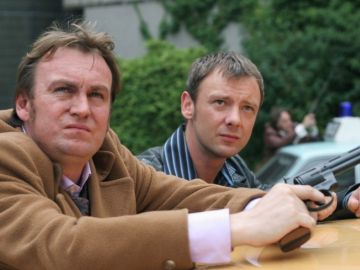 If you now have the time to finally start that TV show you've been meaning to conquer for years as coronavirus restrictions keeps us indoors, or if you just want to return to a series to reminisce and enjoy it all over again, here's our list of TV classics available to stream now...

Our Friends in the North (Series 1)

Peter Flannery's Our Friends in the North was lauded a landmark drama in 1996, and made household names out of Christopher Eccleston, Daniel Craig, Gina McKee and Mark Strong. The series chronicled the highs and lows of Tynesiders Nicky, Geordie, Tosker and Mar from their aspirational teenage days to the crushing disappointment of middle age life. Similar to a soap opera, while also tackling weighty issues such as slum housing, class, politics and police corruption.

Series 1 is available to stream on BritBox.

If you've found yourself thinking, what would spin doctor Peter Capaldi's Malcolm Tucker do right now?, then why not return to Armando Iannucci's award-winning BBC political satire The Thick of It. The comedy, set in the corridors of British government, also stars Rebecca Front, Chris Addison and Tom Hollander.

Matthew Macfadyen and Keeley Hawes star as MI-5 agents working against the clock to protect the nation from terrorists and other threats to national security in BBC One spy thriller Spooks. Nicola Walker, Rupert Penry-Jones and Peter Firth also star.

The complete series is available to stream on BBC iPlayer now.

Hailed as one of television's essential dramas which also signalled the start of the so-called golden age of TV, The Sopranos follows James Gandolfini as Tony Soprano: husband, father and mob boss whose professional and private pressures lead him to seek therapy. Meanwhile, Edie Falco's formidable Carmella Soprano navigates life as a bored and repressed housewife with two ungrateful children and a disloyal criminal husband.

The complete series 1 - 6 is available to watch on Sky Atlantic or stream on NOW TV.

The original drama is available to stream on BBC iPlayer now.

John Cleese's classic comedy series was recently voted the best British sitcom of all time and is often hailed as the sitcom by which all others must be judged. The series follows incompetent Torquay hotel manager Basil Fawlty as he is beleaguered with hotel inspectors, dead guests, and general riff raff. Prunella Scales, Andrew Sachs, Connie Booth also star.

Available to stream on BritBox.

The complete series is available to stream on Sky Atlantic or NOW TV.

The late Bill Paxton plays fundamentalist Utah Mormon Bill Hendrickson, who is juggling the needs and requirements of his three wives in order to keep a happy and harmonious household. Jeanne Tripplehorn, Chloe Sevigny and Ginnifer Goodwin are the women grappling for his affection in the award-winning drama which is less about politics or religion and more a look at human nature.

Available to watch now on Sky Atlantic or stream on NOW TV.

For familiarity, comfort, fun and laughs out loud - and while we desperately await the anticipated reunion currently on hold - watch the complete series of Friends on Netflix now.